On August 4, on the 6th Sunday after Pentecost we had a service in our temple celebrated by our Rector, Archpriest Igor Tarasov.
Following the readings from the Scripture Fr. Igor preached a homily. He pointed out that today’s Gospel lesson is telling about healing of a paralyzed man. But before making that man well our Lord Jesus Christ proclaimed that the sins of that man are forgiven.
Fr. Igor continued, “This reading teaches us that our illnesses are caused by sin. Mainly, of course, our infirmities are not because of our personal sins, but rather the effects of the sinful state, a sin that is all around us in the world and to which we are subject.”
“Medical science tells us that many illnesses are the result of bacteria attacking a weakness in our bodies. Such a weakness may be inherited, or perhaps that weakness comes in old age when our bodies began to fail as they wear out. In both cases we may see that illness is caused by a corrupted state of humanity where a spiritual failure causes physical imperfection.”
“On the other hand, a sickness may be the result of overeating or an unhealthy diet. Then again it is a result of sin called gluttony. It may be the result of using of alcohol or drugs. Then it is a sin of drunkenness or debauchery. Some of us get sick because of a lack of physical activity. Then it may be a sin of laziness. Finally, our illness such may also be the result of a state of mind. Then various sins of our mind, sins of thought and heart make us unhealthy. This is why today’s Gospel does not tell us about any particular cause of the man’s illness. But it shows that he was paralyzed not because of bacteria, old age, unhealthy diet or poor mental state, but because his sins were not forgiven.”
“Our body and our soul are very much connected. They both compose a human person. This is why we should always remember to take care of ourselves, to love ourselves. That means to love our souls and our bodies. If our souls are healthy, not burdened by unforgiven sins, our bodies would be much healthier. And on the opposite, if we live in sins and vices, we should not expect our bodies to be well.”
“Today the Orthodox Church honors the holy memory of St. Mary Magdalene – the woman, called by the Lord Himself from darkness to light and from the power of Satan to God. Tradition tells us that she was immersed in sin. Scripture mentions that Jesus expelled seven devils from her (Mk. 16, 9). Those devils could be understood as seven deadly sins or vices. After that Mary Magdalene received healing. And she sincerely began a new life and never turned away from the path. She followed Jesus along with His Apostles and served Him. She was faithful to the Lord not only when He surrounded by enthusiastic crowds passed through the cities, winning for Himself the glory of a miracle-worker. She was with Him also when He, humiliated and crucified, hung in torment upon the Cross. This is why the Lord, knowing her faithfulness, appeared to her first, and considered her worthy to be first proclaiming His Resurrection. She announced the news of Christ Resurrection to the Apostles. And later she was proclaiming the Gospel in the world, preached Christian faith to the people, especially in Italy and in Rome. This is why Mary M. deserved to be honored as a Saint Equal to the Apostles.”
Fr. Igor concluded his sermon saying, “Having an example of St. Mary Magdalene and coming to an understanding that our bodily weaknesses are the result of our sin, let us ask the Lord’s help. Let us ask Him to forgive our sins in the holy Mystery of Confession. Let us use that great medicine, that healing Sacrament. Let us also fight our sins and bad habits to be freed from possible sicknesses of the body which may be caused by our wrong behavior. And let us then follow our Lord Jesus Christ to His eternal glory.”
After the Liturgy dismissal the Rector reminded everybody that there was a special collection for the church maintenance fund was taken. He asked the people to be generous supporting the church, especially due to a need to repair the fence and the gate on the parish property.
Following the service Fr. Igor and parishioners enjoyed refreshments at our coffee hour. 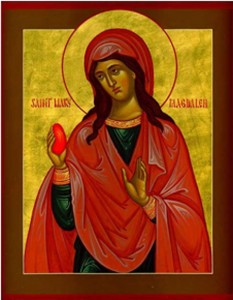