On June 6, on the Sunday of the Blind Man, Rector of St. George Church, Archpriest Igor Tarasov performed the Divine Liturgy in our parish temple. After the reading from the Holy Gospel je preached the following homily:

“Dear brothers and sisters! Today is the sixth and final Sunday of Pascha and we commemorate the sixth sign of our Lord’s mighty power, a miraculous granting of the sight to the man who was born blind (Jn. 9, 1-38). Of all the miracle stories in the Bible, this is the only one in which the person was blind from birth. Yet nothing was impossible with God, and our Savior Jesus Christ, after appearing to the world was able to give sight to such a person”.
“The man blind from the birth is symbolic of all humanity. All the people needed to see God, to be enlightened by His light. Jesus is the Light of the world, as He calls Himself in today’s Gospel (Jn. 9, 5), and all humanity needed illumination by Him. When He came, the world could see Him and be enlightened. Thus healing of the man born blind was a confirmation of that on a certain level, on the level of human physical senses”.
“Today’s Gospel passage also is a picture of the holy Baptism. Again, we have to admit that during this Paschal season. Again, we must speak about Baptism and things related to it. We should recall that sometimes Baptism is called “holy illumination”. A person who is being baptized become enlightened by the light of Christ, his or her eyes becomes open to the spiritual things. The themes of washing, illumination, healing, faith, conversion and salvation are all presented in today’s story. The blind man was told by Jesus to wash his eyes in the pool Siloam, as a result, he received his sight, became illumined and healed. This man had to believe in the power of Jesus. He listened to Him and walked a pretty long distance to the pool. The pool of Siloam was on the outskirts of Jerusalem, a considerable distance from the temple where the blind was sitting and begging. What a spectacle was this man, blind and eyes covered with mud, making his way across the city, from the city to the pool, in faithful expectation of the healing promised by Christ! The name of the pool, Siloam, is translated, Sent, “the Sent one”. It symbolizes Christ, the One sent by God the Father. It tells us about salvation. And, finally, the blind man, after being healed, converts. He becomes the follower of Jesus. Same themes we may recognize in the holy Baptism which involves washing, spiritual illumination, spiritual healing, faith, salvation and conversion”.
“Only through the Lord Jesus Christ such processes become possible. He is the Son of God sent by the Father to the fallen, blind and crippled humanity. This is why it is symbolic that the name of the pool we mention today coincides with Jesus sent by His Father. This is why also, the Lord uses the mud to anoint the eyes of the blind man. The Gospel tells us that Jesus spat on the ground and made clay with the saliva and then anointed the eyes of the blind man with the clay (Jn. 9, 6). St. Irenaeus sees in the mixture of dust and spittle a type of the creation of humanity from earth. Once God created man taking the dust of the earth, but man turned away from the Creator. Now the Son of God came to restore the fallen humanity. In the healing of the blind man He showed His deity by restoring part of the creation in the same way He created humanity in the beginning”.
“In the end of the story, the man who was born blind worshiped Jesus. Having opened the man’s eyes, Jesus opened the eyes of his heart, offering spiritual sight. Thus the man saw the divinity of the Son of Man and worshiped Him”.
“Dear brothers and sisters! Our spiritual eyes of heart were supposed to be opened by the holy mystery of Baptism. Therefore, let us live worshiping the true Light of the world, our Lord, God and Savior Jesus Christ”.

During the Litany of Fervent Supplication the Rector had a petition beseeching the Lord to spare the faithful from the outbreak of the disease.

The choir prayerfully performed the Exapostilarion and the Aposticha of Pascha during preparation for Holy Communion.

After the dismissal of the Liturgy the Rector congratulated Elena Sanjaktary, as well as our younger parishioner Elena Malyshev on the occasion of their past name day, memory of the Holy Equal to the Apostles Queen Helen. Traditional Polychronion was proclaimed. Then Fr. Igor expressed his condolences to the same Malyshev family  due to the passing away of  their mother and grandmother, Valentina Malyshev. The Rector pointed out that our earthly life is always filled with joy and with sorrow altogether.

After the Liturgy Fr. Igor performed the memorial Litia for the newly-departed Valentina Malyshev. 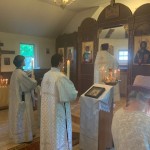 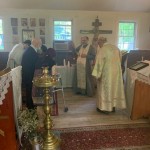