On Thursday, June 10, Rector of St. George Church, Archpriest Igor Tarasov performed Burial service for the newly-departed Valentina Malyshev. It had been served in our temple following the Divine Liturgy of the feast of the Ascension.

After the dismissal of the service Fr. Igor preached a sermon in Russian. He recalled that yesterday the Church celebrated the final day, the leave-taking of Pascha. In the Greek books that day is called “telos tou Pascha” meaning the goal of Pascha while final days of the other feasts are called the “apodosis”, leave-taking. The goal of Pascha was the Ascension of the Lord into heaven. And since our Lord ascended there along with His human body, we are also expected to be there. Our goal of Pascha is to be in heaven. Thus our newly-departed Valentina has a right to join the Lord in Heavenly Kingdom.
Fr. Igor turned to an example. A young boy asked his father to give him a puppy. After some time something happened and the dog died. The little boy was in tears. His father then gave him a kitten, but the kitten, too, got sick and died. The son came weeping to his father saying, “Daddy, why can’t you give me something that doesn’t die?” This is true: we can’t have someone that does not die. Everybody dies. Only some lifeless thing may survive us but it is not going to be forever either. However, there are those who do not die: our soul does not die, our Lord Jesus does not die. He was dead but He rose from the dead. And we will rise on the last day. But before that our souls do not die. Therefore, our beloved Valentina’s soul did not die and is called to the Kingdom of Heaven.

After the Burial service our Rector went to the Holy Trinity Cemetery in Hewlett, NY where he finished the burial of the newly-departed by serving a Litia and sealing the grave.

Following the funeral Rector and parishioners present at the services were invited to the Malyshev family residence where they had a memorial dinner. 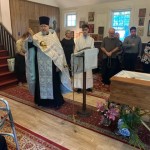 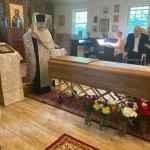 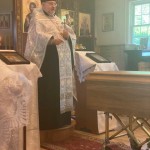 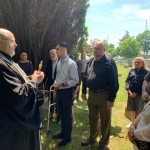 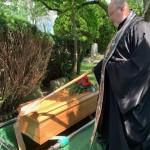