On August 29, on the 10th Sunday after Pentecost, feast of the Translation of the Image Not-Made-By-Hand of the Lord, our parish family had a beautiful celebration. The Rector of St. George Church, Archpriest Igor Tarasov served the Divine Liturgy. After the readings from the Sacred Scripture he preached the following homily:

“Dear brothers and sisters in Christ! Today we continue to celebrate feast of the Dormition and on this day right after the Dormition we also celebrate the Translation of the Image of our Lord from the city of Edessa to the imperial city of Constantinople. That image of our Lord was not made by hands; it had been imprinted by our Lord Himself on the piece of cloth, on a towel. There is a history of that celebration”.
“During the time when our Lord was performing His earthly ministry, a Syrian ruler of the city of Edessa whose name was Abgar, was afflicted with leprosy. That ruler heard about great miracles of Christ. Although not having seen the Lord, Abgar believed in Him and wrote a letter requesting Christ to come and heal him. Abgar sent his court painter, Ananias, with this letter to Palestine telling him to paint an image of the Divine Teacher. Ananias was not able to paint Jesus because of the crowds around Him. But Jesus Himself called Ananias and promised to send one of His disciples to heal Abgar. Then the Lord called for water and a towel. He wiped His face with the towel, and on it was His Divine Image. The Savior sent the towel and a letter to Edessa back with Ananias. With thanksgiving Abgar received the sacred Image and started healing. He continued healing until the arrival of St. Thaddeus, one of the 70 Apostles. The Apostle preached the Gospel and baptized Abgar and all living in Edessa. Later, in the 10th century, the Image Not Made by Hands was translated from Edessa to Constantinople, and today we commemorate that translation. And later the Image was taken by the Latin Crusaders and disappeared. In our Orthodox Church devotion, that image is very popular and revered”.
“Today’s Sunday lesson from the Holy Gospel is about casting out the demon. It is about faith. We mentioned faith last Sunday. Today we may be convinced again how faith is important. Referring to the story of the Syrian ruler Abgar healed by the Image of Christ imprinted on a towel, we see how faith was crucial for that healing. Abgar believed without seeing Christ but he was awarded with the Image of the Savior not made by hands. That Image cured him of the disease”.
“In today’s Gospel story, the child possessed by a demon was tormented in different ways. We may wonder how did the demon get inside the man’s son and possess him? To this question we have the reply of Christ: “O faithless and perverse generation” (Mt. 17, 17). The demon came into possession of the son through unbelief, faithlessness. It was not only the son’s unbelief, but also the unbelief of the father and others around the son. However, as with everything that God allows to happen, there is a positive, providential aspect to this illness. It is clear that because of the illness of the son, the father has been brought to know humility. Thus he calls Christ, “Lord” and asks, “Have mercy on my son” (Mt. 17, 15). This shows humility, not pride. God gives His grace to the humble ones. Thus the possessed son of the humble father was healed”.
“Dear brothers and sisters! Today’s festal troparion says: ”Of Thine own will Thou were pleased to ascend the cross in the flesh to deliver Thy creatures from bondage to the enemy”. Our Lord voluntarily endured death on the cross in order to save us, to deliver us from the slavery of the devil. That slavery was seen in the demon-possessed youth. But that slavery was ended. However, the world and the human kind continue to serve the enemy and to be possessed. The image of God imprinted in our nature is often being darkened and perverted. Our modern generation may also be called “faithless and perverse”. Therefore, the Image of the Savior in the middle of the church today, the Image Not-Made by Hands, should remind us of our true destiny – to be the image of God. As the father of the possessed young man we need to become humble, to recognize God, not the enemy, to be our Lord, and then to ask the Lord to be merciful to us. And, of course, we need faith to be worthy of the Lord’s presence in our lives. We need the faith of the persons healed by the Lord, the faith of Abgar”.
“Dear brothers and sisters! Let us humbly ask the Lord to grant us faith through the prayers of His Most Holy Mother!”

The choir prayerfully performed festal Sticheras of the Dormition during preparation for Holy Communion.

The interaction between the Rector, parishioners and guests continued at the trapeza table during the coffee hour. 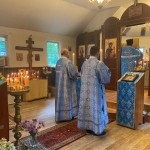 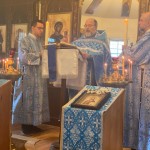 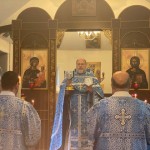 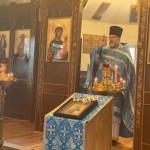 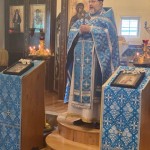 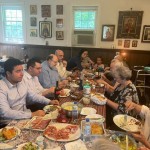