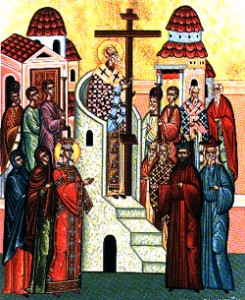 On September 27th, on the feast of the Exaltation of the Precious and Life-giving Cross, we had a solemn celebration at our temple. Before the Hours St. George’s Rector, Archpriest Igor Tarasov placed the cross in the middle of the church and venerated it.
At the Divine Liturgy, after the Gospel lesson Fr. Igor preached a homily about the feast of the Cross:
“Today we heard the Gospel lesson about the sufferings of Christ on the Cross. Even though the Evangelists do not tell us all the cruel and violent details of that execution, we can imagine how terrible it was. God died in horrible pain for us, the sinners. He was left alone, rejected by His own chosen people, betrayed by His disciple, abandoned by His followers. Only a few people like His Blessed Mother, some myrrh-bearing women and His close disciple, Apostle John, remained faithful and were present under the Cross. Jesus accomplished our salvation through these holy Passions.
“If we think of those holy Passions and death on the Cross, we may see that it was terrible, but also glorious. As St. Nikolai of Serbia says, “It was the end, but at the same time it was the beginning : the suffering of the God-man and the beginning of His glory, the end of the self-deception of the Jews and the beginning of the unique thing in human history – the miracle that called the Church of Christ, which became the mother of Christian civilization on several continents inhabited by barbarians . When a person reads a description of the suffering of our Lord Jesus Christ, he may have two feelings : the sense of horror from the madness and cruelty of some people and the feeling of delight from an elevated thoughts and love of Christ”.”
“That horror of the Cross, of the idea that God Himself died on the Cross, would be impossible to endure, if it did not give a delight. It is an interesting contradiction. Let us say that your brother did something bad to you. You may be offended and hate your brother. But if you look at that remembering that it is your brother, then you can endure the insult, you can stand it.”
“A certain man planted a garden of fruit trees, but the wildings, bad fruits grew . He came to prune and to take care of the trees, but the prickly branches wounded his hands and scratched his face. The gardener became angry , but in his anger he did not take an ax to uproot the trees , but suffered all , because he knew that it was his garden. So was the Son of God Who endured all the torments caused to Him by the people , always bearing in mind that mankind – this is His garden, His creation , and He is called not to cut down wild planting, but to make them noble, even at the cost of His own blood.”
“The love of Christ represented by His Cross surpasses everything. This is why when we also suffer or have any trouble time, let us recall the Cross of Christ. Let us imagine ourselves under the Cross, along with the Most Holy Mother of God, the myrrh-bearers and with St. John. Let us come to the Cross where Jesus is ready to embrace us. Let us come into His embrace.”
“Let us remember that the Cross, as we sing today, will protect the people of God, will give us an unconquerable victory over all our tribulations, pains and sufferings. Let us come to venerate the Cross today and let us extol it in our hearts, in our lives to endure with Christ and to vouchsafe to be the partakers of His glorious Resurrection.”
Following the end of the Liturgy the Rector and parishioners venerated the Cross.