On September 26, on the Sunday before the Exaltation of the Holy Cross, we had a beautiful celebration at St. George Church. Our Rector, Archpriest Igor Tarasov served the Divine Liturgy in our temple. After the Gospel lesson he preached the following homily:

“Dear brothers and sisters in Christ! Today we are preparing to celebrate feast of the Exaltation of the Precious and Life-Giving Cross. The Gospel lesson assigned for today is pretty short. It tells us basically one idea: that God so loved the world that He gave His Onlybegotten Son, so that everyone would not die but have life everlasting. And since we are going to celebrate feast dedicated to the Holy Cross and in some way commemorate salutary passions of our Lord, it is good to keep in mind why all those sufferings of our Savior took place”.
“The Second Person of the Holy Trinity, God the Son acquired human nature, took our flesh upon Himself in order to save and redeem the human race. Due to the sin of the first people, Adam and Eve, mankind offended the Creator and deserved punishment. People marred God’s image in themselves and became sinful and subject to death. In order to destroy that evil God Himself gave us a hand. He sent His Onlybegotten Son who became man and accomplished salvation of the human kind. God did not wish that mankind remained lost, but in His love desired to save it”.
“There is an old crucifix in some church in Europe. It very impressively shows the sufferings of Jesus. On the top it has an inscription saying: “Did not spare His Son.” God did not spare His only Son, but gave Him to us because He so loved us. Therefore, all passions, sufferings and death of our Lord Jesus Christ happened because of God’s love toward us. We must be felt loved by God”.
“We may be wondering why only God could save us. It is easy to answer. Mankind being fallen could not rise without special help from God. Man was first created by God and could not come to existence without Him. In the same way the corrupted man could not be renewed and purified by himself. Such as a dead man cannot be raised without supernatural power to raise him up, so the human kind was not capable of saving itself without God”.
“But we may also ask why God, being all-powerful and able to perform anything, wished to send His Son to accomplish salvation. Fathers of the Church, especially St. Athanasius the Great explain that it was necessary for the Son of God only to become man in order to redeem us. First of all, only God could reconcile mankind with the offended God’s majesty. And only God could conquer our enemies which are sin, death and the devil. No one else could destroy the power of sin, the chains of death, and the deception of the devil. And God had to become man, to incarnate – in order to take upon Himself our sufferings and become our substitute in undergoing the due punishment. Only a perfect man could accomplish that, but there were no perfect people because of sin. Jesus was the only perfect man, because He had no sin. In addition, our Lord becoming man had to give us an example of godly life and of love toward God and neighbor”.
“St. Augustine wrote: “The principal reason of Christ’s coming was that man realizes the love of God, and to realize it that he may become kindled to love Him””.
“Dear brothers and sisters! If God loves us, it is understandable that we must love Him in return. Therefore, reflecting on the holy and salutary passions of the Lord, let us love God and show that love in our everyday life”.

The choir nicely performed Psalm 33 and a hymn in honor of the Most Holy Theotokos during preparation for Holy Communion.

After the dismissal of the Liturgy the Rector made some announcements. He also served the memorial Litia for the newly-departed Anatoli Hilinski on the 9th day of his repose. Then a memorial luncheon was served for the parishioners. 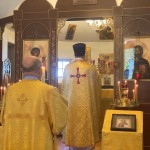 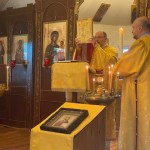 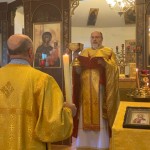 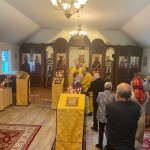 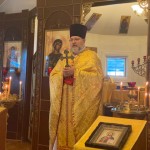 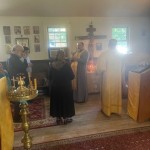