On October 3, on the Sunday after the Exaltation, St. George Parish family had a beautiful service. In addition to Sunday celebration, we also honored our Rector, Archpriest Igor Tarasov on his past name day (October 2). Fr. Igor headed the Divine Liturgy. He was co-served by Deacon Alexey Golubov, cleric of St. Nicholas Cathedral in New York, who decorated our service with his beautiful voice.

After the Gospel lesson beautifully proclaimed by the deacon, the Rector preached the following homily:

“Dear Father, dear brothers and sisters in Christ! Sunday after the Exaltation of the Precious and Life-giving Cross gives us a clear direction what a follower of our Lord should do. This makes certain sense. We have celebrated feast of the Exaltation, the cross is exalted and venerated in the church. We have revived again the holy passion and death of the Lord. Now, after all this is accomplished, the Gospel lesson gives us a rule our Savior wished to leave for us.  It is as follows: if we want to go after our Lord Jesus Christ we must deny ourselves, take up the cross and follow Him”.
“That means that we must make a certain effort, to do some work and to undergo difficulties and sufferings. The way of the Christ’s follower is not easy. On the contrary, it is hard and painful. Let us see what it implies”.
“First of all, according to the words of our Lord, we have to deny ourselves. That means that we have to renounce our pride, selfishness and a desire for our own advantage. If someone wants to go on a journey, he would not take many things with him, but he would be satisfied with having something most important. And if a soldier is called to go to war, he is not taking all his belongings with him. In order to accomplish something a person needs dedication to the cause and renunciation of things which may cause an obstruction. Many people give up a lot of things in order to achieve earthly goals: to acquire an education, to become someone, to get a high position. If it is possible to do for the achievements which are temporary, why it should not be appropriate to achieve eternal glory?”
“The second thing is to take up the cross and follow Christ. If we prefer not to take the cross, we will suffer any way. Then it is worth to listen to Christ and to follow in His steps carrying our cross”.
“Dear Father, dear brothers and sisters! After doing those two things, we will have a relief and a reward. When our Lord died on the cross, His sufferings ended, He was relieved. And after three days He rose up from the dead. This was His reward. If He, being without sin, had to go through sufferings in order to enter into His glory, how can we, being corrupted and weakened by sin, achieve such a glory without being purified in temptations and made strong in sufferings? What lives within us now is Adam of old along with his passions and evil desires. How can we take off the old man and clothe in a new one without pain and sufferings? We have to take up a cross and “crucify our flesh with its passions and desires” (Gal. 5, 24), “put to death your members which are on the earth” (Col. 3, 5), to die in a mystical way and to have a life hidden in Christ”.
“This is the teaching of the Cross, a teaching so needed and important that the Church does not limit herself with proclaiming it, wishes us to use many other signs to remember about it, first of all the image of the cross which we encounter everywhere in our religious life”.
“Today we commemorate Holy Great Martyr Eustachius, or Eustace, along with his family. He was a Roman general, a pagan. His pagan name was Placidas. While hunting in the country one day, he was converted to the faith of Christ through the apparition of an uncommonly majestic stag, between whose antlers he saw the Cross of Christ, and through which the Lord spoke to him with a human voice. Upon returning home, he learned that his wife had also had a vision in which she was instructed to become a Christian. So, they both were baptized. The family was then subjected to such trials as biblical Job endured. Their servants died, all their goods were stolen, and on a pilgrimage to Jerusalem they were scattered abroad, each not even knowing if the others were still alive. By the Providence of God, they were united again after many years, and returned to Rome in glory. Later they were martyred for Christ. That was their way of the Cross, the following in the steps of Christ”.
“If today we also wish to honor the yesterday’s Saint, my personal heavenly patron, Holy faithful prince Igor, we should recall that his life was also bearing of the cross. He endured many sufferings and persecutions from his own people. And finally he was brutally murdered when he already renounced his power as a prince, when he became a humble monk. Wickedness and hostility drove the people to seize the monk and to murder him. That was St. Igor’s way, his way of the cross. And such was the way of every Christian Saint. All of them were taking their crosses and followed Christ.”
“Dear Father, dear brothers and sisters! Let us listen to the words of Jesus and let us deny ourselves, take up the cross and follow Him”.

The choir prayerfully performed hymns of the Exaltation of the Cross before Holy Communion.

After the dismissal of the Liturgy the church Warden, Olga Roussanow had a speech in Russian and on behalf of our parishioners congratulated the Rector on the occasion of his past name day. Traditional Polychronion was proclaimed to Fr. Igor.

Our celebration continued on the church grounds where our wonderful cooks prepared a festal luncheon. The clergy and our parishioners enjoyed delicious meals, a nice company and beautiful sunny weather. A toast was raised on behalf of the Rector celebrating his name day. In addition, Moses Dunetz proclaimed a greeting to Fr. Igor in English on behalf of all parishioners. 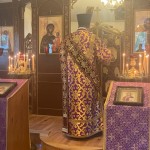 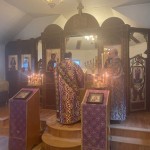 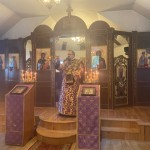 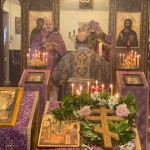 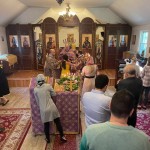 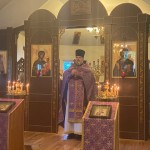 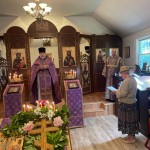 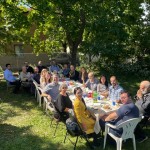