On November 14, on the 21st Sunday after Pentecost, the Rector of St. George Church, Archpriest Igor Tarasov served the Divine Liturgy in our parish temple. After the Gospel lesson he preached the following homily:

“Dear brothers and sisters in Christ! Today’s reading from the Holy Gospel takes us to the country of the Gadarenes which is opposite of Galilee. Our Lord Jesus Christ came there along with His disciples after crossing the Lake of Gennesaret, and there He cast out the evil spirits from a possessed man (Lk. 8, 26-39)”.
“Reflecting upon this Gospel story we may recall that the demons asked Christ to permit them to enter the herd of swine. And He did. This indicates that God allows evil things to happen for a reason. Last Sunday we said that God allows terrible disasters to happen due to our sinfulness. And in today’s Gospel story we are talking about a much less terrible, but still impressive loss – the demons entered the swine and the whole herd ran down the steep place into the lake and drowned (Lk. 8, 33). According to the Old Testament, pigs were unclean animals, but they are still God’s creatures. And the demons, although it sounds weird, are also God’s creatures! God created them as good, but they chose to be evil and fell away from Him. But today’s Gospel story tells us that the Lord heard their request and allowed that the animals would suffer because of them. And what is a request from a creature to the Creator? It is a prayer. Thus, although it sounds weird, the demons did pray Christ and He answered their prayer”.
“But the demons remained those who they were – the evil spirits. They killed the swine. It shows us their malice, their hatred towards all the God’s creatures. St. John Chrysostom says that if they could, the demons would destroy all God’s creation. They would kill all the people if they could and would not be restrained by God. Therefore, dear brothers and sisters, if not for God’s power, the evil spirits would long ago destroy all the human kind”.
“The Gospel lesson further tells us that the people from the country of the Gadarenes asked Jesus to depart from them (Lk. 8, 37). This was an evil choice. They did it because they do not wish Jesus to break, to change their usual way of life. He would disturb their sinful way. Those people were pagans, not the Jews. The fact that they had swine tells us that. So, they did not really know the faith in one God and did not probably wish that their pagan lifestyle would be disturbed. They have already suffered a loss, losing several thousand head of cattle, when he was only approaching the town! What might happen if he comes to the city itself? This is an example of selfish fear, a fear before something high and divine, a fear that the Lord may enter into our life and change it. He may make us different while we are so used to be what we are, sinful and unclean, just like those pigs. Something similar happens now, when a person is afraid to let the Lord somehow enter into his soul”.
“I heard a story of a man who lived a regular secular life, a life in different little sins. His family members were good Christians and attended the church, but he did not. When the people were asking that person why he would not join his family and begin to come to the church, he answered: “If I will, I will have to go to the church, go to confession, stop drinking; I will have to fast, to pray and be a good person. It’s hard and I don’t need that.””
“Dear brothers and sisters! It may sound funny but it is really sad. We have to beware of that attitude and avoid it. It makes us renounce God’s grace. In the same way the people from the country of the Gadarenes renounced God’s grace in today’s Gospel lesson when they asked Jesus to depart from their land. But again, we become convinced that God may hear the prayers of those who even wish evil things to happen. When the demons beg Him to permit them to enter the swine the Lord allows them. When the sinful people ask Him to depart from their country, He departs”.
“Dear brothers and sisters! Today’s Gospel story teaches us a few things. It teaches to pray in faith. God listens to the prayer. It also teaches us to avoid evil. We need to stay away from any forms of the evil forces in this world such as occult teachings, spiritism, fortune telling, sorcery and different superstitions. Otherwise, the evil spirits could have a power over us. And finally, today’s Gospel teaches us not to chase Jesus away, but ask for His grace. Asking for His grace we may be delivered from all evil and to may be not among those who chases the Lord away, but among His faithful disciples who follow Him everywhere, follow Him in their earthly life and will follow Him into the eternal blessedness!”

During preparation for Holy Communion the choir nicely performed hymns in honor of St. Cosmas and Damian whose memory was celebrated on that day.

Following the dismissal of the Liturgy the Rector made some announcements.

After the service of the Divine Liturgy the Rector performed the Mystery of Baptism over Naomi Pugliese who desired to convert to the Christian faith and to join the Holy Orthodox Church. In the Holy Baptism she was given the name Johanna. Following the Sacraments of Baptism and Chrismation Johanna received her first Holy Communion. The Rector then congratulated her on that very solemn and important occasion, as well as her Godmother, Paraskeva Kosmidis. 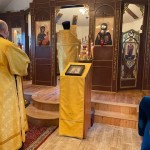 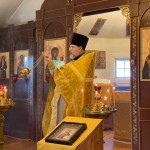 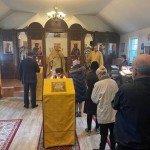 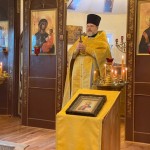 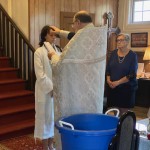 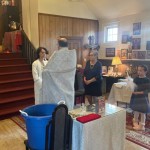 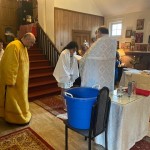 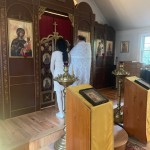 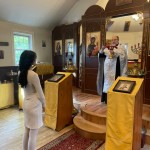