On November 28, on the 23rd Sunday after Pentecost, Rector of St. George Church, Archpriest Igor Tarasov served the Divine Liturgy in our parish temple. After the readings from the Sacred Scripture he preached the following homily:

“Dear brothers and sisters in Christ! Today we begin the Nativity Fast. We are going to start spiritually preparing for Christmas, for the celebration of the Birth of the Savior. And today’s Sunday Gospel lesson offers us a great instruction from the parable about Good Samaritan (Lk. 10, 25-30). Interestingly, those two words were not imaginable by the Jews in the time of Christ. Samaritans were enemies and could not be called “good”. However, our Lord tells this parable and wishes His listeners to change their mind. By this He teaches us that God’s commandment of love towards the neighbor concerns all men, and not just our relatives or compatriots. It is very difficult in our times when people are so divided. From time to time we talk about the fact that this country is so divided politically. And many other countries and nations are either divided or hostile to each other”.
“Withdrawing from any political talks, we should now reflect on the spiritual meaning of that parable”.
“A certain man goes down from Jerusalem to Jericho. A certain man means any man, any one of us. Jerusalem signifies heaven and Jericho signifies the earth. This is the destiny of us all, to be on earth, although our home is in heaven. This man falls among thieves who strip him of his clothes, wounding him and leaving him half-dead (Lk. 10, 30). Here the thieves mean the demons who attack us through our weaknesses and wound us, leaving us stripped of our spiritual clothes and spiritually dying, having lost grace and faith”.
“A priest and then a Levite pass by and do not help (Lk. 10, 31-32). By them we understand those who, having a higher rank and duty, have hard hearts and show no love, for they are hypocrites and “pass by on the other side”. But a Samaritan helps the man, shows compassion. Although the Samaritan does not share the fullness of the outward faith, his heart is kind, and he shows mercy. This Good Samaritan represents Christ Himself. Christ was rejected by the Jews, but had great compassion which the Jews did not have”.
“The Samaritan, that is Christ, went to the man and bound up his wounds and poured in oil and wine and then set the man on his own animal. This is what Christ did for us: He came to us. In other words He became man, one of us. He then bound up our spiritual wounds with His word and poured on us His grace of salvation, the oil and wine of our souls. Then he set us on his own animal, in other words he gave us faith. Without faith we are not able to walk, so faith is our ride to salvation, our transport”.
“The Samaritan then took the man to an inn, cared for him and gave the innkeeper two denarii to look after the man, telling the innkeeper that if it cost more, he would repay him when he returned. (Lk. 10, 34-35). By the inn, we would understand the Church, where men can receive Christ’s healing and care. Faith transports us to the Church. Then the innkeeper is the priest, the dispenser of the grace and healing. But it is true that all members of the Church are also innkeepers, dispensers of spiritual and other help to those in the world around us”.
“The two coins represent the two ways in which we are saved. First of all, we need to repent through prayer and fasting. That is the first coin. The second coin, however, is the grace of the Sacraments that we receive from God in response to our repentance and prayer and fasting. Thus these two coins are both very important. Together they form a virtuous circle”.
“And finally, if we, members of the Church of God, the “innkeepers”, stretch our hands to others and give more of ourselves, spend more on loving care of others – then Christ will reward us when He returns at the end of the world”.
“Dear brothers and sisters! This is the spiritual meaning of today’s parable. Christ tells it to the lawyer who knows the commandments but does not apply them. And Christ says to him: “Go and do likewise” (Lk. 10, 37). Thus today Christ says to each one of us also: “Go and do likewise””.

During the Litany of Fervent Supplication, Fr. Igor proclaimed a petition beseeching the Lord to spare the faithful from the outbreak of the disease as well as a petition of thanksgiving due to the last week’s celebration of the Thanksgiving Day.

During preparation for Holy Communion the choir nicely performed the Psalm 33.

Following the dismissal of the Liturgy the Rector reminded the parishioners of the beginning of the Nativity Fast and made some announcements. He also congratulated the Suric family on the occasion of their son’s past name day. Fr. Igor greeted little Victor, handed to him the Theotokian prosphora and proclaimed the Polychronion on his behalf.

After the Liturgy the Rector performed the memorial Litia for the newly-departed Archpriest George Chuviakov, a priest who baptized Fr. Igor, as well as commemorating Elena Malyshev, the deceased spouse of Andrew Malyshev on the day of her passing. 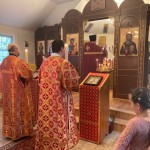 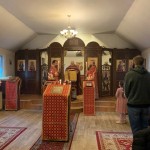 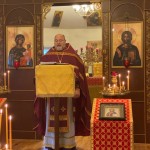 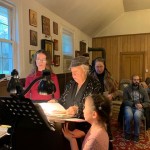 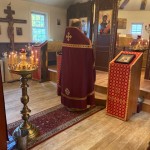 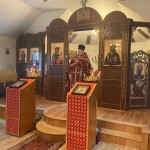 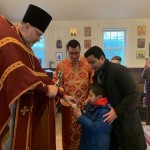 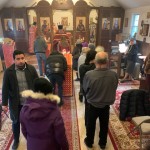