On December 26, on the Sunday of the Holy Forefathers, as well as feast of the 5 Martyrs, we had a nice celebration at St. George Church. Our Rector, Archpriest Igor Tarasov served the Divine Liturgy.
Following the reading from the Holy Gospel Fr. Igor preached a homily. He addressed the celebration of the Holy Forefathers, the ancestors of our faith in the Old Testament times; and he mentioned today’s Gospel lesson telling a parable of a man who invited many guests for his great supper. The Rector pointed out that the main idea of that Gospel reading is that “many are called but few are chosen” (Lk. 14, 24).
God the Creator called all humanity to be in HIs Kingdom. However, the very first humans, Adam and Eve, who were invited to eternal blessedness, dosobeyed God and were not able to stay in paradise. Therefore, the mankind was expecting the promised Messiah to come and to redeem the human race. He did come, our Lord Jesus Christ, becoming the New Adam, being born of the Virgin who became the New Eve. Before that coming God also called the people to serve Him but not many were chosen to accept that invitation. Only certain righteous persons were whom we honor as the Holy Forefathers, the Saints of the Old Testament.
Fr. Igor further reminded parishioners that we are holding the Bible Study meetings every Saturday to learn the truths of the Sacred Scripture (now we posed the meetings for Christmas break). At this point we are reviewing the Old Testament and already spoke about some of those Holy Forefathers. The Rector encouraged the people yo attend those study meetings to study the Bible and understand it.
Reading the Old Testament we may notice that first God chose certain just persons to serve Him in a special way but then those persons did accept God’s invitation. In that way they became chosen. Noah, Abraham, Moses and other holy men – all of them did say “yes” to God’s call. Thus they were becoming those few chosen among many who were called. Although these hole people “did not receive the promise” (Hebr. 11, 38) – they did not see Christ being born – they became worthy of His Kingdom.
In the similar way, the Holy 5 Martyrs whom we celebrate on December 26, the Christian era Saints, the holy people of the New Testament, became chosen because they answered God’s invitation. There were many people in the region of Cappadocia in the 3th century; they were even a number of Christians there. But only those 5 men became the Martyrs for Christ. They did not conspire to suffer together. But one by one, seeing the boldness of each other, they were coming forward and confessing Christ. Only them became chosen in that particular time and in that particular locality.
The Rector concluded his homily by calling the faithful to look at the examples of the holy people of both Old and New Testament and to accept the God’s invitation to join Him in His Kingdom.
Since our Choir Director, Olga Roussanow was sick, and some other choir singers did not appear, the singing was mostly done by the singer Olga Vnukova. She prayerfully performed the hymns from the Nativity Canon during preparation for Holy Communion.
Following the dismissal of the Liturgy the Rector made some announcements and encouraged the parishioners to participate in service of the Liturgy by singing at least of some parts, like the Creed and the Lord’s Prayer. 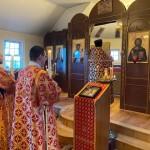 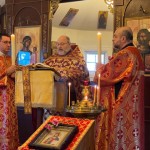 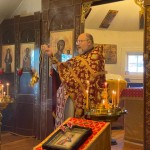 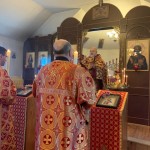