On January 19th the Orthodox Church celebrates great feast of the Theophany, or Baptism of the Lord. Our parish had a beautiful celebration of that holy day headed by our Rector, Archpriest Igor Tarasov. He served the Divine Liturgy at St. George Church. After the Gospel lesson the Rector preached the following homily:

“Dear brothers and sisters in Christ! Today we celebrate the great holy day of the Baptism of the Lord, also called the Theophany. At today’s Liturgy we sing the communion hymn which repeats the words of today’s Epistle, “The grace of God that brings salvation has appeared to all men” (Tit. 2, 11). Theophany means the appearance of God. It occurred when our Lord Jesus Christ came to the Jordan River to be baptized by John. This was the moment when Christ revealed Himself to the universe. But St. Paul says that God has appeared to all men through His grace that brings salvation. The whole mission of our Lord Jesus Christ was to bring salvation to the human kind. This is why He appeared by bringing the way of salvation, by bestowing His saving grace”.
“Celebrating Baptism of the Lord we renew our own baptismal vows which oblige us to be faithful to Christ and to renounce the evil one. Our Baptism was the door which opened to us the saving grace of the Lord. But this was supposed to be just the beginning of our salvation. Now we have to preserve that grace and to obtain it more and more. In today’s Epistle St. Paul clearly says that “denying ungodliness and worldly lusts, we should live soberly, righteously, and godly in the present age” (Tit. 2, 12).  “The present age” about which St. Paul is saying is the time we live, the time between the two comings of Christ. It happened to be relatively long. More than two thousand years mankind is living in that time, in that “present age”. And we may say that this time is becoming more and more difficult. People abandon faith, denounce religion, go astray from the traditional moral values. The climate is changing and the diseases spread. Some wise people say that it happened all the time in those two thousand years, that there were periods of disasters and periods of decline of faith and morals. But since we live now, not some centuries ago, it seems that our age is so unfortunate. But we are here to endure all these tests”.
“Every year living in that time we commemorate the mystery of the Incarnation of the Son of God celebrating these winter feasts of the Nativity, of the Circumcision and of the Theophany. Thus we honor and remember the first coming of Christ. It began with His glorious Birth in the Cave of Bethlehem, it continued when the Child was given the name Jesus, the name of the Savior. And it did completely reveal itself when Jesus Christ appeared to the people at the Jordan”.
“The grace of that first coming is still with us. We should live by it. Our life “in the present age” has to be sober, righteous and godly, as St. Paul says (Tit. 2, 12). It means it should be spiritual and just. Striving for what is spiritual and avoiding what is sinful is not very easy. Our corrupted nature makes it very difficult. However, we are not left alone in that. We are no longer on our own. “The grace of God that brings salvation has appeared” (Tit. 2, 11). It is available to us. It may help us. What seems to be impossible with men may become possible with God (Lk. 18, 27). With His grace many things are possible, including our salvation”.
“This “present age” is also important as time of the expectation of the second coming of Christ. St. Paul says that we are “looking for the blessed hope and glorious appearing of our great God and Savior Jesus Christ” (Tit. 2, 13). If we honor and commemorate the first coming of Christ, His Incarnation, we should remember and expect His second coming. We do it not by celebrating or holding feasts, but by our everyday Christian life, living for Christ and “being His own special people, zealous for good works,” as St. Paul says in today’s reading (Tit. 2, 14)”.
“Dear brothers and sisters in Christ! Let us then live in our present time, celebrating and honoring the first appearing of the Lord, His Theophany and expecting His glorious second Coming. Let us live soberly, righteously and godly. The Divine grace which appeared with Christ to all men will definitely help us in that. It will make us His own special people, zealous for good works. It will then save us all!”

The choir prayerfully performed hymns of the feast during preparation for Holy Communion.
After the Prayer behind the Ambo the Rector performed the Great Blessing of water.

Following the Liturgy dismissal the Rector and the altar servers came before the icon stand and performed the rite of glorification singing the troparion, kontakion and magnification of the Theophany. Then the Rector greeted the faithful on the great holy day and briefly instructed on the use and keeping of the holy water. 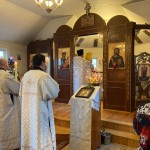 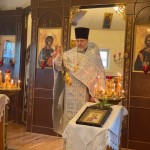 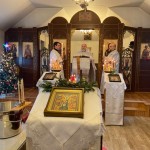 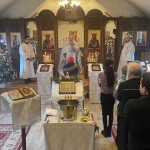 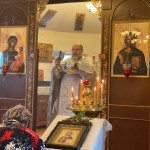 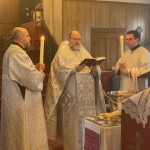 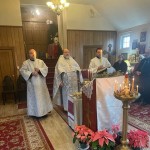 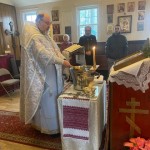 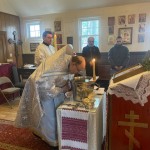 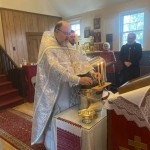 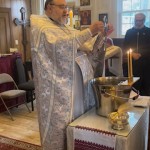 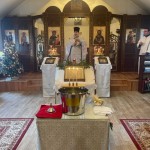