On March 13, on the First Sunday of Lent, also known as celebration of the Triumph of the Orthodoxy, St. George parish had a nice liturgical service. Our Rector, Archpriest Igor Tarasov served the Liturgy of St. Basil the Great. After the Scripture readings he preached the following homily:

“Dear brothers and sisters in Christ! Today is the First Sunday of Lent, the feast known as the Triumph of Orthodoxy. Celebrating that solemnity we should ask ourselves what is the meaning of this word – ‘Orthodoxy”. Orthodoxy means right or correct teaching. A literally translation from the Greek tells us that it is “the right glory”. And since in the matters of faith the whole glory belongs to God, the Orthodoxy is a correct worship of God”.
“We are first of all Christians, followers of our Lord Jesus Christ. But every human teaching can be altered, perverted or deviated. Take any teaching in religion, politics or philosophy. It may have so many alterations, interpretations and doctrines. It is so in any area of human thought. And it is so in religious matters. Unfortunately, many people follow different religions, have many ways of attempting to understand the supernatural and to reach the Supreme Being. A lot of people on earth do not follow Christ. And even in the true faith in Christ we see many different and separate teachings and Church denominations. Thus, we need a correct understanding, interpretation of the teaching of Christ. Such a correct and true teaching, a right way to the Lord is Orthodoxy”.
“One of the most important parts of the Orthodox teaching is Incarnation of God. The Orthodox Church teaches that the Son of God, our Lord Jesus Christ, took our flesh, became Man. Jesus Christ being one Person has two natures: divine and human. Some false teachings called heresies taught differently about the Incarnation of the Son of God and about His natures”.
“Another important aspect of Orthodoxy is especially celebrated today. We commemorate the victory of the Orthodox teaching regarding the holy icons. Again, many people in the past did not understand how we can venerate the images. And today a lot of non-Orthodox people do not grasp the idea of the holy icons being venerated. The Orthodox Church teaches that because Jesus being God is also Man, we can picture Him in a human form. Those pictures are the holy icons. We can see God through them”.
“In today’s Gospel lesson one the Apostles of Christ, Philip told another disciple, Nathanael, “Come and see” (Jn. 1, 46). He was answering to the doubts of Nathanael regarding the Messiah who came from the town of Nazareth. Nathanael was wondering how can “anything good come out of Nazareth” (Jn. 1, 46). It seems that Nazareth did not have the best reputation. But Jesus did come from that town. He lived there and was raised there as a Man. In the same way some people can be asking, “How can we worship God who is Man”? Or, “How can we picture God who is invisible?” These are the questions coming either from those who honestly wish to believe(like Nathanael who was an Israelite with no deceit) or from those who believe incorrectly (like heretics)”.
“We Orthodox can answer to both repeating the words of Philip, “Come and see”. Let them come to the Orthodox church and see the holy icons. Let them see our faith in all its beauty. Let them see our services and the people praying the true God incarnate.”
“God did come in an accessible and even human form. This is why He can be pictured as Man. But even before the Incarnation of Jesus, God did appear to the people in a human form. If we recall the Old Testament, God appeared to Abraham as the three men, or the three Angels. Abraham hospitably received them and we in the Orthodox Church have a very beautiful and mysteriously spiritual icon of those three Angels known as the Old Testament Trinity. It is one of our most beautiful icons, especially the one written by the famous Russian iconographer, Venerable Andrew Rublev. If God did so to Abraham, why we should not image Him in Jesus Who was a true human being? Jesus did not just appear in human form but He did become one of us. Therefore we have a right to picture Him as such”.
“Dear brothers and sisters! Despite the doubts of man (including the doubts of Nathanael) there is a true teaching of Christ saying that God became Man and we venerate His image. We venerate not wood and paint but the One pictured on and by them. And doing so, keeping this Orthodox faith we may see in the future the divine glory, “heaven open, and the Angels ascending and descending upon the Son of Man.” (Jn. 1, 51).

The choir prayerfully performed the 33rd Psalm during preparation for Holy Communion.

After the Ambo Prayer the Rector performed prayer service of the Sunday of Orthodoxy solemnly declaring the Orthodox faith and proclaiming eternal memory to the champions of that faith and the Polychronion to the Church hierarchy and Orthodox Christians.

At the dismissal the Rector congratulated the parishioners on the completion of the first week of Lent and wished them to continue an endeavor of further observance of the fast. He also made some announcements. 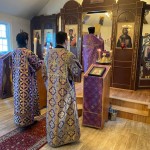 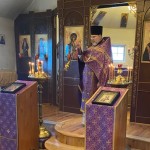 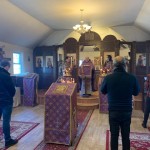 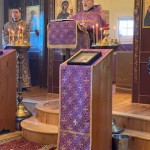 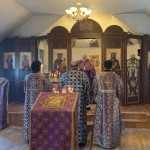 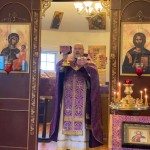 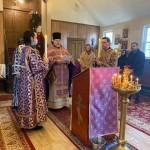 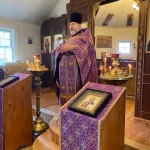 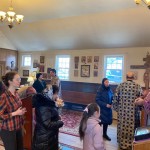