On December 4 the Church celebrates feast of the Entrance of the Most Holy Mother of God into Temple. We had a nice celebration at St. George Church. Our Rector, Archpriest Igor Tarasov served the Divine Liturgy. Following the Scripture readings he preached a homily:

“The Entry into the Temple of the Most Holy Mother of God happened, according to the preserved accounts of Holy Tradition, in the following manner. The parents of the Virgin Mary, righteous Joachim and Anna brought their little daughter Mary to the Temple when She was 3 years old.  Then the high-priest, through an inspiration from above, led the Most Holy Virgin into the Holy of Holies. It was a special place in the Temple, separated by the veil where only the high-priest could enter one time a year with a purifying sacrifice of blood. Therefore, all those present in the Temple were astonished at this most unusual occurrence…”
“The meaning of this holy day for us is very profound. Today we hear the Troparion of this feast saying that we celebrate a “preview, or prelude of the goodwill of God”. The Entrance of the Theotokos into the Holy of Holies is a preview of what was intended by God to happen to the human kind. Not Blessed Mother, but Her Son, the Lord Jesus Christ entered the Holy of the Holies to offer a sacrifice for the whole humanity. Due to that sacrifice of His blood shed on the Cross, we became saved. And coming of the Blessed Virgin into the Temple, Her ascending on the steps leading to it, it is a sign, a preview of our universal ascending to the countenance of God.”
“The Prophet, holy king David  foresaw this and exclaimed, “The virgins, her companions who follow her, shall be brought to You, with gladness and rejoicing they shall be brought; they shall enter the King’s palace”(Ps. 44, 15). Those virgins, the companions of the Theotokos are the souls of the faithful. The King’s palace is God’s heavenly abode. It is the task for our souls to follow the Blessed Virgin, to be Her companions.”
“The tradition tells us that the little girl Mary ascended to the Temple through the steps. There were 15 those steps. In the same way, our souls may have many steps to climb into the heavenly glory, up to the holiness. St. Theophan the Recluse, a great Russian spiritual writer,  named three major and most important steps for our souls to follow the Theotokos.”
“St. Theophan says that the first step is to chose virtue instead of sin, to chose good over evil. It is already difficult because our corrupted souls like to live according to the desires of flesh. Our flesh enslaves the soul, and the soul lives pleasing the flesh. For instance, it is easier to eat everything than to keep fast. It is easier to indulge yourself than to persevere. If we firmly chose virtue and pious life over a life of sin, then we make the fist step.”|
“The second step is to act in piety not just superficially, but through all our mind and through all our heart. Some people appear to be good, pious or caring, but they do it because it makes them look good, because it helps them in life or makes them successful. For instance, some workers do good work because they want to be paid well and to be promoted, not because they feel they should be good workers. All our essence should desire to be good in our hearts and works, to be pious before the Lord and to be caring for the neighbor.”
“Finally, the third step is to live with God, to feel His presence, “to walk before God”, as the Scripture says. This is the goal of the soul. Two previous steps are just preparing for that. This is to enter through the veil, to enter into the Holy of Holies, to be in front of God’s countenance. Some holy people became worthy of such a state. They were able to reach that final step even during their earthly life. Thus, this is possible for us.”
“These are the three steps to follow the Most Holy Mother of God in Her Entrance. On which step is our soul? Let us remember that any one of those three steps is good. What is not good if we are under them, if we lay in sin and chose sin instead of climbing those steps. Thus, dear brothers and sisters, like those virgins, the companions of the Blessed Virgin, let us follow Her on the steps to the entrance into the King’s holy palace, into the heavenly abode of the Almighty God!”

After the Liturgy dismissal the Rector and the altar servers came before the icon of the feast and performed the rite of glorification singing the troparion, kontakion and magnification of the Entrance. After celebration Fr. Igor congratulated the parishioners on the occasion of the feast and expressed his joy of seeing children in the temple. 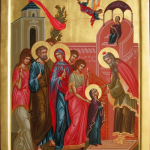