On April 22, on the Holy and Great Friday we had two special services in our parish temple. This day is the most sorrowful day in Christian calendar. On Holy Friday we commemorate crucifixion of our Lord Jesus Christ, His death on the Cross, as well as His burial. St. George Church’s Rector, Archpriest Igor Tarasov served Vespers with the procession of the Shroud at 4:00 PM. He was co-served by Abbot Eutychius (Dovganyuk).

At the end of this service holy Shroud had been solemnly carried out from the altar to the middle of the church and placed there for veneration.

Following the dismissal the Rector preached a homily. He addressed the sorrowful fact that God died on that day. Jesus Christ, the Son of God was crucified and died, He was then buried. It is an incomprehensible concept to grasp. On the other hand, our Lord was also a true Man. And as a true Man He also died. It is more comprehensible but still we are shocked that an innocent person such as Jesus was condemned to a terrible death, a kind and miracle working Christ was crucified by His own people. That reflection sends us to the present horrible and sorrowful events in Ukraine. Ukraine is now going through its own way of the Cross. Many Ukrainians die because of the unjust and evil war. The enemies of Ukraine are killing the civilians, bombing the cities and destroying the buildings. They do it in a devilish way, committing terrible atrocities. The hierarchy of the Church was asking to cease fire for the Holy Week but they did not. Then it had been proposed to stop bombing for the feast of Pascha. But they probably won’t listen. They cannot serve the just cause as they claim because they are acting in such an evil and barbaric way. Where they come, they restore the monuments to Lenin and rename the streets after the Communist butchers while they intentionally bombard the holy churches, including the churches belonging to the Patriarchate of Moscow. Seeing that how can we comfort people who lost their children, parents, spouses – lost them forever?! We can find the spiritual answer to that sorrow by looking at the Lord’s Tomb, at the Holy Shroud. God the Father also lost His only Son today. The Most Holy Theotokos also lost Her only Son. God permitted that to occur. God desired that to happen to redeem mankind. And in our earthly life God permits sufferings to happen if He loves us. God allows us to be punished for our sinfulness. God loves Orthodox people of Ukraine and thus permits them to undergo that terrible ordeal. But we believe and we are sure that good always wins. The sufferings, death and burial of Christ ended in His Resurrection. Without His Holy Passions, without the cross, without His death and without His burial there would be no radiant Resurrection. Therefore, we should believe and hope that every evil will end and good will prevail.

At 7:00 PM Fr. Igor and Fr. Eutychius celebrated Matins on the Lord’s Tomb. Most of this service was performed before the Shroud placed in the middle of the church. After the Great Doxologion the priests, altar servers and parishioners performed the procession around the church. The clergy carried the holy Shroud resembling burial of the Lord. 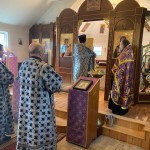 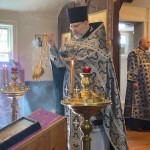 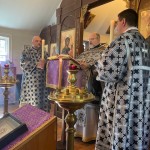 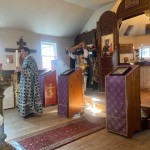 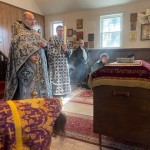 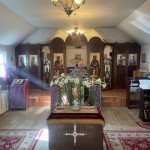 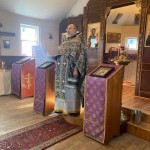 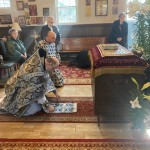 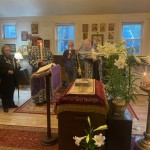 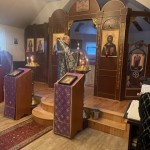 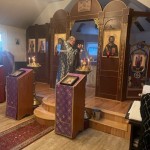 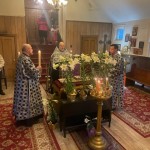 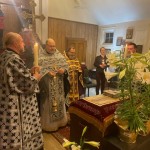 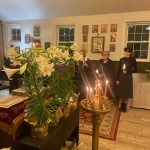 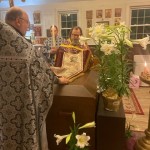