On May 15, on the Sunday of the Paralytic, Rector of St. George Church, Archpriest Igor Tarasov celebrated the Divine Liturgy in our parish temple. After the Gospel lesson he preached the following homily:

“Dear brothers and sisters, Christ is risen! Today we celebrate Sunday of the Paralytic. We commemorate the event described in today’s Gospel lesson: healing of the paralytic at the pool located at the Sheep Gate (Jn. 5, 1-15). The pool was called in Hebrew Bethesda which means the “House of mercy”, “Mercy house””.
“The state of paralysis reminds us of the state in which the whole mankind was living due to sin. The human kind was spiritually paralyzed. It needed a Savior, a great Healer. But who could become such a Healer, such a Savior? In many legends and myths people thought that it should be a great man, a hero. Even the Jews who believed in one God thought that the Messiah should be a human person. However, this was not possible for any man because human kind was sinful. It could be done only by God, but God willed to do it becoming also a Man”.
“The whole attitude of waiting for a man, for a hero to save is reflected in today’s Gospel. The paralytic says, “Sir, I have no man to put me into the pool when the water is stirred up…” (Jn. 5, 7). He put his trust on men and he was unsuccessful for many years. He should have learned from the Scripture saying, “Do not put your trust in princes, in the sons of men, in whom there is no salvation” (Ps. 145, 3). These words of the Psalm we sing every Sunday at the Divine Liturgy. People who attend the church should know them by heart. We should not put our trust in men but in God”.
“Jesus was the Son of God, thus He could help the paralytic. So, He can help all the people in need, in sufferings, in pain. He is able to do this because He conquered death, was risen from the dead”.
“On the other hand, the people who follow Christ, who are united with Him, can also become the partakers of His power. They continue His miracle-working and the mission of salvation. In today’s Epistle we heard that Holy Apostle Peter was able to heal the paralytic also. And he was able to raise a recently dead young woman. St. Peter healed by the name of Jesus Christ (Acts 9, 34). And it is not accidental that today’s Epistle mentions that the followers of Christ were already called “Saints” (Acts 9, 32). People dedicated and belonging to God are the holy people, the saints. Such people are able to conduct the divine grace and the will of God. If we put our trust on God, He can act through us”.
“Dear brothers and sisters! Let us put our trust in God. Let us be faithful to our calling as Christians. Let us strive for being the partakers of our Lord’s grace and the conductors of His power. Let us also acquire this power in the Church where we can meet the people dedicated to God, the Saints of our days. The Church is our House of mercy, our healing place, a place of God’s graces. Let us belong here and become a part of our Lord’s Resurrection”.

The choir prayerfully performed the Exapostilarion of Pascha and the “Angel exclaimed” during the time of preparation for Holy Communion.

After the dismissal of the Liturgy the Rector made some announcements. 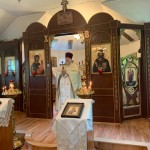 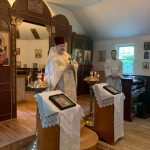 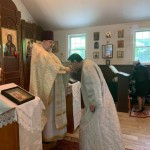 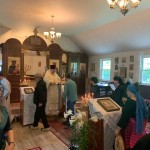