On June 12 of this year all Orthodox Christians celebrated Pentecost, the feast of the Most Holy Trinity. Our St. George parish family had a beautiful celebration in our temple. The church was nicely adorned with greenery. Our Rector, Archpriest Igor Tarasov served the Divine Liturgy. After the Gospel lesson he preached the following homily:

“Dear brothers and sisters in Christ! Today we celebrate one of the greatest feasts of our calendar. One of the names of this holy day is Pentecost which is translated as “the 50th” because it is celebrated on the 50th day after Pascha. The real reason of our celebration of that 50th day after Easter is that on this day the Holy Spirit descended upon the Holy Apostles”.
“Today’s Epistle lesson vividly describes that holy event. It tells us that the Apostles were all together in one place when the day of Pentecost had fully come (Acts 2, 1). It should be said that the Jews have their own celebration of Pentecost. This feast is called the Feast of Weeks , and it comes 50 days after Passover. It was a celebration of the firstfruits of harvest. People used to adorn their homes with greenery, in the same way as we Orthodox Christians do it now for our celebration. It was a feast of the greenery, as it is called now in some Slavic countries, the “Green holidays”. The Jews also believe that this was the day when Moses received Ten Commandments from God, the day when the Jews acquired the Law of God. Thus, Holy Apostles were in Jerusalem on the Jewish celebration of Pentecost. They stood together as the Lord commanded them to do when He ascended into heaven”.
“The Epistle lesson says that they were together in one place. “And suddenly there came a sound from heaven, as of a rushing mighty wind, and it filled the whole house where they were sitting” (Acts 2, 1-2). Then the Epistle says that divided tongues, as a fire, appeared to the Apostles, and one sat upon each of them (Acts 2, 3). This was the appearance of the Holy Spirit, as a mighty sound of the wind from heaven and the tongues of fire. It also had great results. After each of the fiery tongues sat upon the Apostles, they began to speak with other tongues, as the Spirit gave them utterance (Acts 2, 4). This was the first miraculous sign of the Holy Spirit filling the Apostles. They became able to speak different languages. The Epistle tells that people from different countries who were gathered in Jerusalem for the feast could hear their native tongues from the Apostles. All these people were Jews. They could be born Jewish or were proselytes, Gentiles who converted to Judaism. At those times the Jews already lived in many different countries and spoke different languages. Today’s reading mentions a number of those ancient countries from where the pilgrims came to Jerusalem and became witnesses to that miraculous speaking of the Apostles”.
“We know that the Apostles were not very educated men. Some of them were fishermen from Galilee. However, the Holy Spirit made them wise and enabled them to catch a lot of men to the nets of salvation in Jesus Christ. Today’s festal troparion describes that saying, “Blessed art Thou, Christ our God, Who didst make the fishermen wise by sending down upon them the Holy Spirit, and through them didst draw the universe into Thy net…”The Holy Spirit made these people who were not wise in the world wise in Christ”.
“Dear brothers and sisters! If the Old Testament Pentecost celebrated the birthday of the Mosaic Law, our Pentecost is the birthday for the Church. If the Jews celebrated acquiring of the Torah, we celebrate acquiring of God Himself, His Holy and Good and Life-creating Spirit. The same Spirit Who “was hovering over the face of the waters” in the first creation and made order out of chaos came upon the Disciples of Christ. But in the similar way as the Holy Spirit came down upon the Apostles when they expected Him to come praying together, this Spirit continues to come upon us when we are together as members of the same Apostolic Church. Recently, I had a conversation with a person who was once baptized but is not really practicing Christian faith. He was asking why should we assemble in the temples and attend the church services. The answer is in the Apostolic behavior. The Lord Himself commanded them to stay together in Jerusalem, to pray in humility and to wait for the promised gift, the Holy Spirit. Only upon all of them being together the Holy Spirit could descend. Thus, only if we are gathered in the temple the Holy Spirit could come upon us and bestow His abundant gifts, His rich graces. We may pray alone, we may conduct a righteous life alone, but in order to be filled with the Holy Spirit we need to be together, in the community of believers, in One, Holy, Catholic and Apostolic Church. This is why I am so concerned with your attendance of the church services. This is why the Church commands us not to miss Sunday Liturgy. Together we may be blessed in a special and unique way”.
“Therefore, dear brothers and sisters, let us be grateful for the gift of the Holy Spirit, the gift of the Church existing for us. Let us pray that today especially, but also on any other day, the Holy Spirit may come and dwell within us, and may cleanse us of all impurity and save our souls!”

The choir piously performed the magnification of the feast along with the verses during the preparation for Holy Communion.

Following the Liturgy dismissal the Rector and the altar server performed the rite of Glorification singing the troparion, kontakion and magnification of the feast before the festal icon in the middle of the church. Then the Rector greeted the faithful on the great holy day.

After the Liturgy the Rector served Pentecostal Vespers with kneeling prayers. 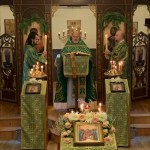 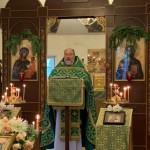 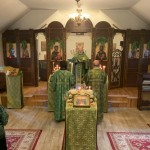 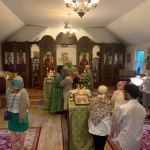 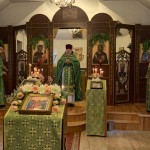 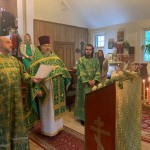