On December 29, on the Sunday of the holy Forefathers, St. George Parish family had a nice liturgical celebration. Our Rector, Archpriest Igor Tarasov served the Divine Liturgy. Following the Scripture readings he preached a sermon:

“For today’s Sunday the Church assigns a reading from the Epistle of St. Paul to the Colossians. All the righteous men of the Old Testament whom we call the holy Forefathers awaited the appearance of the Messiah and He did appear to the world in Jesus Christ. In a similar way we, Christians, should be righteous and expect the second coming of Christ. St. Paul says that when Christ appears, we also will appear with Him in glory (Col. 3, 4). If we will strive for righteousness, we will be able to share the glory of the Lord. We have to seek true life in Christ, awaiting the heavenly and glorious revelation, expecting His second coming.”
“To be successful in living true life in Christ we need to put to death what is earthly or sinful in us. St. Paul says in today’s Epistle, “Put to death your members which are on the earth: fornication, uncleanness, passion, evil desire, and covetousness, which is idolatry” (Col. 3, 5). Holy Forefathers achieved righteousness by avoiding idolatry in a literal sense, being faithful to one true God and not serving false gods. If it was enough for them, our task is more demanding. We need to avoid a more sophisticated idolatry, serving the false gods of our passions. One step to achieve this was made when we received holy Baptism. In Baptism we are supposed to die spiritually with Christ, we have to put to death the man of old in ourselves. In his another Epistle St. Paul teaches: “Do you not know that as many of us were baptized into Christ Jesus were baptized into His death? Therefore, we were buried with Him through Baptism into death, that just as Christ was raised from the dead by the glory of the Father, even so we also should walk in newness of life” (Rom. 6, 3-4). After we put to death a man of old, after we put off the old Adam we have to be reborn with Christ to a new life with Him. Thus, we may say that we died with Christ in Baptism. Our sins were drowned and we rose to a new life.”
“Another step to achieve righteousness in Christ is to put to death what is earthly in us. Since we are baptized and put off the old Adam nature and have put on the new Christ nature, we have to die to what is earthly. This has to be done every day. Some people may think that true Christian life is having peace. No, it is a constant struggle. True Christian life demands continuous warfare against the enemies of that life. We have to put to death what is earthly in us. One of the desert fathers said, “If you say that you have died to the world, don’t be so confident until you depart from your body. You may say, ‘I have died’; but Satan has not died”. Thus, every day we have to fight against our temptations, sinful desires and inclinations. Every day we are called to die to unbelief, to our fears and uncertainties that we may rise to confidence, courage and trust. In this way we die to the old nature that we may rise with Christ as new persons.”
“Finally, we all know that some day we will have to die physically. We Christians should view it not as a final point of our existence, but as a passing to a new life. We should notice that living is a matter of life and death. As we go through life we die and live again many times. The infant dies for a child to live. The child dies to make way for the teenager. The teenager dies so the adult can emerge. And so into old age, we go constantly from life to death. Part of me is dying every moment. Moment by moment cells in my body are dying and being replaced with new ones. If it did not happen, I would not be alive. As St. Paul says, “I die daily” (1 Cor. 15, 31). But we do not consider such death really fatal. Same should be considered about our physical death. It is rather a change, a passing to another stage of our existence.”
“Dear brothers and sisters, today we see that there are three kinds of dying for righteous people. First is to die with Christ in Baptism, so we can rise and live with Him forever. Second is to die with Christ every day to what is earthly and sinful in us. Third is to die one day a physical death. But if we have died the first two deaths, then the third death, the physical one, will not be a death, but a resurrection. Thus it was to the Christian Martyrs and Confessors. Thus it should be to us, so when Jesus Christ, our Life appears, we may also appear with Him in glory! (Col. 3, 4).” 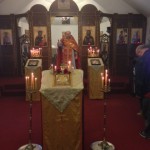 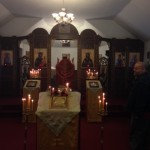 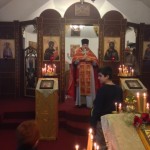