On the Cheesefare Sunday the Church commemorates the exile of Adam and Eve from paradise. This day is also known as the Forgiveness Sunday because Orthodox Christians ask mutual forgiveness before they begin the spiritual journey of the Great Lent. On this day, on March 2, St. George parish had services in our temple. Our Rector, Archpriest Igor Tarasov celebrated the Divine Liturgy. After the reading from the Gospel he preached a homily:

“Today’s Epistle lesson is telling us just before the blessed time of Lent that we should put away all our desires of flesh and evil mind. The words of St. Paul sound very impressively. He announces and calls: “The night is far spent, the day is at hand. Therefore, let us cast off the works of darkness, and let us put on the armor of light” (Rom. 13, 12). This is our main advice for the beginning of Lent.”
“In his Epistle St. Paul enumerates certain sins of flesh such as revelry, drunkenness, lewdness and lust. Then he mentions envy and places it in the same category (Rom. 13, 13). Envy is a sin of the spirit, of the evil mind. Yet St. Paul mentions it here. We may recall the parable of the Prodigal Son that was read to us two weeks ago. The younger brother in that parable sinned in the flesh while the older brother sinned in the spirit – in envy, or jealousy. In the end, the one who sinned in the flesh was on the inside of the father’s house, and the one who sinned in the spirit – in envy – was on the outside. Envy can close the doors of the Kingdom of God just as tightly as lewdness and lust. Of the sins of the spirit, the vice of envy or jealousy is near the top of the list.”
“Let us recall that the devil has been tempting us with jealousy and envy since the beginning of man. Today we commemorate the expulsion of the first man, Adam from paradise. Adam and Eve were expelled from the state of blessedness because they violated the only commandment God gave them: not to eat the fruit from a certain tree. They broke that commandment by eating the forbidden fruit. But they were tempted to do that, tempted by the devil. Holy Fathers say that before God created man the devil found out that God desired to create man according to God’s image and likeness. The devil was created before man, along with other Angels. He had a great knowledge and somehow he found out about God’s plan. It became known to him that even if man falls, God desired to save him by sending His Only-begotten Son and by redeeming human kind. Because of that, as the Holy Fathers teach, the devil became kindled by envy and decided to tempt Adam and Eve to sin, to raise against God. And they did. Thus, the paradise was lost because of the devil’s envy. Although the sin of Adam and Eve was the sin of disobedience, not envy, but the devil’s envy was the reason for that.”
“Later, when Cain and Abel brought their offerings to God, God accepted Abel’s sacrifice and rejected Cain’s. Cain was so jealous that he killed his brother. The world first murder was born of jealousy. Further the Old Testament tells us that because of jealousy the brothers of Joseph sold him to slavery. And the New Testament tells that our Lord Jesus Christ was crucified out of jealousy. Pilate knew that “the chief priests had handed Jesus over to him because of envy” (Mk. 15, 10). It was envy that crucified the Lord!”
“St. Paul offers us a way out of jealousy and envy. “Put on the Lord Jesus Christ,” he says in the Epistle lesson (Rom. 13, 14). It means every day we have to imitate Christ, to put on ourselves His compassion, His kindness, His forgiveness, His meekness, His patience, and above all His love. It means to put on Jesus Christ by receiving Him in Holy Communion. He then will fill us with love – the love which is patient and kind, the love which “does not envy, does not boast, and is not proud” (1 Cor. 13, 4).”
“A second way of fighting envy offered by St. Paul is found in the words, “Make no provision for the flesh, to fulfill its lusts” (Rom. 13, 14). Kill your spiritual enemies by starvation, he says. Destroy them by neglect. Make no provision for them. Deny the fuel and you exhaust the flame. Here fasting is very handy. In fact, tomorrow we begin Lent, and we are called for a strict abstaining from certain foods. But it is difficult by itself. It should be strengthen by prayer and repentance. We must confess our envy to Christ. We must pray to be blessed by Christ’s love. Envy cannot exist in the atmosphere of prayer, fasting and repentance.”
“Dear brothers and sisters! Let us destroy the enemies of our soul by putting on Jesus Christ and by making no provisions for flesh. Let us pray that the Lord may help us, especially during this blessed Lenten season we are about to begin. Let us ask God to assist us to overcome our weaknesses, to become closer to Him through prayer, fasting and repentance. Let us cast off all the works of darkness and begin this fruitful season with our Lord’s blessing!”

During the Litany of fervent supplication the Rector added special petitions for multiplication of love and eradication of hatred in the land of Ukraine.

Following the Divine Liturgy the Rector performed Vespers with the Rite of Forgiveness. After the singing of the Great prokimenon he changed his priestly vestments to the Lenten color of black. Following the Vespers dismissal Fr. Igor preached a brief sermon about Lent. He compared the period of Great Fast with the 40-day fasting of our Lord Jesus Christ in wilderness and with the 40-year wandering in wilderness of the Jewish people before they could enter into the Promised Land. Even Moses, the leader of the Jews was not blessed to enter that land because of his shortcomings. Our promised land is the Kingdom of God, but our temporary goal is to reach worthily the celebration of the glorious Resurrection of Christ. Lent is a journey towards that celebration. And we need to get there. We will if we walk through Lent by strengthening our spiritual life: by prayer, fasting, repentance and the works of charity. But before we begin we have to ask mutual forgiveness for all possible offenses and trespasses, for the Lord said in today’s Liturgy Gospel lesson that if we do not forgive others their trespasses God will not forgive us our sins (Mt. 6, 14). Therefore, the Rector called the parishioners to forgive him and each other.

The Rector asked for forgiveness bending his knees. The parishioners also knelt down and asked their pastor for forgiveness. Then each one of the faithful could come to the Rector to kiss the cross and to express forgiveness.

After the services of this special day the Rector and parishioners joined at the Blini Lunch. We enjoyed delicious meals, especially the blini, nicely prepared by our ladies. 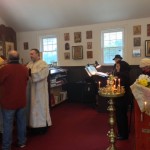 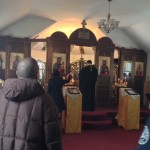 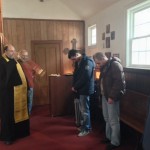 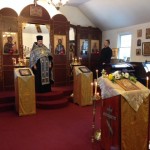 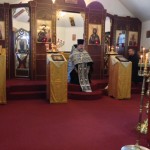 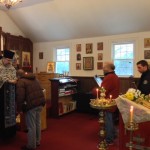