On April 6, on the Fifth Sunday of Lent our parish had a nice liturgical celebration. The Divine Liturgy of St. Basil was served by St. George’s Rector, Archpriest Igor Tarasov in our temple. Following the lesson from the Gospel he preached a homily:

“On this Fifth Sunday of Lent we are again hearing a prophecy of Jesus Christ Himself that very soon He will be betrayed, condemned to death and killed, but on the third day He will rise again (Mk. 10, 33-34). Same prophecy we could hear in the Gospel lesson on the last Sunday (Mk. 9, 31). In this way we are prepared to commemorate the holy Passions of our Lord and to celebrate His holy Resurrection. One of the most important aspects of this holy time on which we should reflect is the whole idea of our Redemption through the sufferings and death of Christ. We turned to that idea many times during Lent. Today we need to think of it again.”
“Today’s Epistle lesson is relatively short, but it contains a very profound explanation of our Redemption. Writing to the Hebrews, St. Paul uses references to the Old Testament rules and rituals. Many of them contained offerings of certain sacrifices for the forgiveness of sins and for cleansing of the people. Our Redemption is a universal forgiveness of human sin and a universal cleansing of the human race. This is why St. Paul calls our Savior, Jesus Christ the High Priest who offered such a universal sacrifice. St. Paul says, “Christ came as High Priest of the good things to come, with the greater and more perfect tabernacle not made with hands” (Heb. 9, 11).  He goes on and says that Christ offered this sacrifice “not with the blood of goats and calves, but with His own blood” (Heb. 9, 12). Christ, in contrast to the Old Testament priests became a High Priest of the New Covenant. The Old Testament priests had to offer their sacrifices in the Temple many times. They did it for certain people who asked for that to cleanse their certain sins. And every year a high priest entered the Holy of holies with the bloody sacrifice for all the sins of the Jewish people committed during the year. Christ entered the heavenly, not earthly sanctuary once and for all, and obtained eternal redemption (Heb. 9, 12).  His one sacrifice covers all sins by all people for all time. His blood being a true human blood was shed on the Cross and healed our corrupt humanity. ”For if the blood of bulls and goats and the ashes of a heifer, sprinkling the unclean, sanctifies for the purifying of the flesh, how much more shall the blood of Christ, who through the eternal Spirit offered Himself without spot to God, cleanse your conscience from dead works”, says St. Paul (Heb. 9, 13-14).”
“The sacrifice of Christ was offered not only to forgive our sins. It also restored us to our proper relationship with God. It purified, cleansed our conscience from dead works. What are the dead works? They include all our human activity of this life, especially our evil or corrupt deeds. For St. Paul the dead works also meant the rituals of the Old Covenant which became dead after Christ. After Jesus Christ offered Himself on the Cross and redeemed the human kind, all previous sacrifices and offerings became useless. Now we need to serve not the letter of God’s law but the living God Himself (Heb. 9, 14).”
“Dear brothers and sisters! How very serious are the ideas given to us in today’s Epistle lesson! Let us keep them in mind and in our hearts, so we may be worthy of our Lord’s unique and universal sacrifice. He accomplished our salvation by His voluntary act of love. What can we offer to Him for that? Any gift would be insufficient to give thanks for our Lord’s grace. But we may at least try to be grateful for our Redemption by living according to His commandments and according to our conscience.”
“Referring to St. Paul, we may recall that for him the world was divided into two classes of people: the Jews who had the law given to them directly by God in written form, and the Gentiles who, although they did not have the written law, nevertheless had a God-implanted knowledge of right and wrong within their hearts. According to St. Paul, both would be judged by God. The Jews will be judged on the basis of the written law; the Gentiles on the basis of the law written not on tablets or books but in the hearts, on the basis of their conscience. We Christians have both. We have the written law and Commandments in the Scripture and Church discipline. We also have the law in ourselves, our conscience, the God’s voice within ourselves. Let us honor both and live by both.”
“Let us also remember that the written Commandments and our conscience can guide us, can warn us, can instruct us. But there is one thing that they cannot do. They cannot undo the wrong we have done. They cannot heal the wounds we inflict. They cannot eradicate guilt. They cannot forgive sins. Only Christ can do that. Only the blood of Christ can purify our conscience. Only He can forgive and heal and erase the past. He did it once and for all and He continues to do it for each of us. Let us then follow Him through His holy Passions to His victory of the holy Resurrection!” 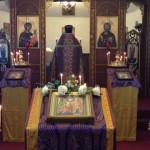 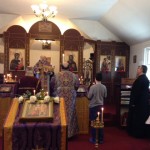 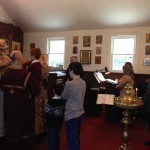 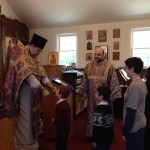