On June 7, on the First Sunday after Pentecost dedicated to All Saints, Archpriest Igor Tarasov, Rector of St. George Church, served the Divine Liturgy in our temple. Following the Gospel reading he preached a homily:

“On the First Sunday after Pentecost we celebrate feast of All Saints. We pay our respects to all men and women who lived their lives as holy and God-pleasing people, the just and righteous ones. It should be understood because as a result of the Descent of the Holy Spirit the Church was born, and members of the Church became able to acquire holiness. The Saints we honor are the people who conquered evil in their own lives, in their own souls, just as our Lord Jesus Christ did it for the whole world.”
“It is the nature of the human existence that if every person overcomes evil in himself, he achieves a victory that affects other people and the whole world. Universal evil, being conquered even in one single person, suffers a great loss. Even one single holy person means a lot to the whole world. By their very existence the holy men and women whom we call the Saints, bring down to the earth a great blessing from God. St. Barsanophius teaches that a prayer of three holy men once preserved the world from total destruction. Because of the Saints, even of those who are unknown, the course of the universal events changes. Every Saint has a significance because by his life he crosses the boundaries of earthly history and reaches into eternity. The Saints are the salt of the earth. They are the sense of human existence. The very earth is preserved because of them. When the earth would stop producing the Saints, the force which preserves the world from a disaster will disappear. In the Old Testament we read that Abraham asked God whether the Lord would spare Sodom and Gomorrah for the sake of ten righteous men. The Lord answered: “I will not destroy it for the sake of ten” (Gen. 18, 32). St. Siluanos says: “The world stands by the prayer, and when the prayer will weaken, the world will perish.””
“Many people do not understand the connection between the religious life of an individual and the well-being of the world, between internal warfare against evil within one person and everlasting life. People often think that spiritual life of an individual is significant only for him and that it will cease to exist if it stops to exist in the soul of an individual. But in reality the spiritual life of the Saints affects the life of the whole world. And if there will be no Saints in the world, the world will end.”
“Therefore, today we honor those people who became the best out of human race. Today’s kontakion calls them “the first-fruits of nature” offered by the universe to the “Planter of creation” who is God. Such sacrifice, the lives of the God-bearing martyrs, along with the holy Apostles, Venerable Fathers and Mothers, all other Saints, became possible after our Lord Jesus Christ fulfilled His work of redemption of humanity. Now the redeemed humanity could bring forth the fruits of holiness and faithfulness. Some holy men and women could be found even before that, in the Old Testament. These were righteous people living according to the will of God despite the great abyss of sinfulness in which the whole humanity was kept. Their number was not so great. But in Jesus Christ thousands and millions of people could reach holiness. In fact, all Christians are called to be holy, to be Saints. This is why when St. Paul composed his letter to the Colossians he wrote the following address, “To the Saints and faithful brethren in Christ who are in Colosse” (Col. 1, 2).”
“Therefore, dear brothers and sisters, let us honor those holy men and women, because of whom the world existed. Let us, by ourselves, conduct spiritual life and our own warfare against evil. Let us imitate the Saints and strive for holiness, because we are Christian people. Then we will be able to receive the awards promised by our Lord Jesus Christ in today’s Gospel, and then we will inherit eternal life.”

After the dismissal of the Liturgy the Rector congratulated Andrew and Maria Malyshew on the occasion of the past name day of their little daughter Yelena (Helen). Traditional “Mnogaia leta” was proclaimed.

The Rector preached a short sermon in Russian conveying the ideas of his English homily.  He also reminded parishioners that tomorrow we begin St. Peter’s Fast dedicated to the work and endeavors of the Holy Apostles.

Following the service the Rector and parishioners enjoyed delicious meals and a nice company at the coffee hour. 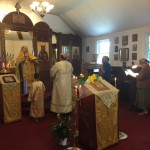 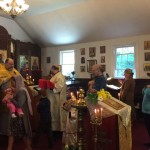 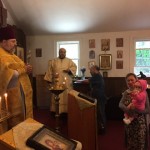 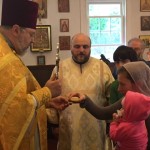 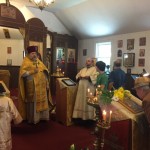 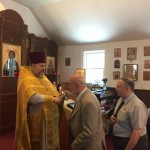