On June 28, on the 4th Sunday after Pentecost, St. George parish held a liturgical celebration in its temple. The Church Rector, Archpriest Igor Tarasov served the Divine Liturgy. Following the Gospel lesson he preached a homily in Russian. An English translation of that homily is as follows:

”Today’s Gospel reading tells us about a healing of a paralyzed servant of the Roman centurion. Our Lord Jesus Christ performed such a miracle even without seeing or approaching the sick person. It was done through faith and intercession of the ill servant’s master. Let us reflect upon this event described in the Gospel of Matthew.”
“A centurion was a Roman army officer who commanded 100 hundred men. This man mentioned in the Gospel was a Gentile. But he had a faith that Jesus is the One who can help his servant to be cured from the disease. Although Christ usually stressed that He came to save His own people, the Jews, the whole ministry and the whole message of His teaching was encompassing the whole human race, regardless of the people’s origin. Jesus is really the Savior of all. For Him ethnic or social distinctions are void. In the eyes of the Jews, especially the Pharisees who were always ready to criticize Jesus, coming to the house of a Gentile was inappropriate. If Jesus entered the centurion’s home, it would make Him unclean. However, the Lord could act without entering the Gentile’s house. Doing so, He showed that salvation will come upon all the people of faith.”
“In the words of the centurion we hear the recognition of Jesus’ authority. He calls Jesus the Lord. It was significant for a man who himself had authority. But although the centurion had the power over men, he understood that only Jesus had the power over disease. He also understood his own limitations and unworthiness. Therefore, he said to Christ: “Lord, I am not worthy that You should come under my roof “(Mt. 8, 8). But his sense of humility was perfected by his firm faith in the healing power of the Lord. Thus he continued: “But only speak a word, and my servant will be healed” (Mt. 8, 8).  The word of the Savior is enough for a man to be freed from his disease.”
“This event teaches us about the importance of faith. Our Lord Jesus Christ praised the faith of the centurion. He speaks highly about that Gentile person, lifting him up as an example. The Lord goes further and declares nullity of the Jewish supremacy, saying that many from other nations will share the heavenly blessings with the Jewish patriarchs. He prophesizes: “And I say to you that many will come from east and west, and sit down with Abraham, Isaac and Jacob in the kingdom of heaven. But the sons of the kingdom will be cast out into outer darkness” (Mt. 8, 11-12). We know that the sons of the kingdom are Jews, who had a sense of racial superiority as the chosen people of God. Coming of Christ demonstrated that not the Jews but all the people who believe in the Savior will become the chosen nation, the New Israel.”
“Therefore, let us keep and cherish our faith in the Lord Jesus Christ, our only Savior. Let us recognize His power and authority over the whole world and over any little thing in our lives. Let us believe that He can help us if we have faith. Let us also understand our limitations and unworthiness and humbly ask Him to help us. And lat us be worthy of the name of Christian that means to be among the chosen people of God, His holy nation which is prepared to sit down with Abraham, Isaac and Jacob, also with the Holy Apostles, Martyrs and other Saints in the Kingdom of heaven.”

After the dismissal of the Liturgy the Rector preached a short sermon in English to stress the ideas of his previously preached Russian homily. 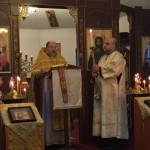 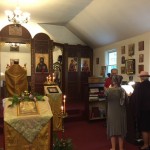 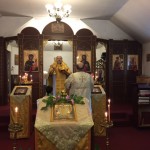 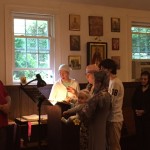 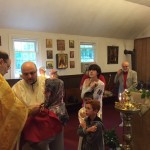 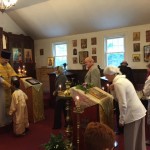