On July 5, on the 5th Sunday after Pentecost, Rector of St. George Church, Archpriest Igor Tarasov served the Divine Liturgy in our temple. After the reading from the Holy Gospel he preached the following homily:

“Today’s Gospel lesson is about casting out the demons who possessed two men in the country of Gergesines. It is telling us that our Lord Jesus Christ came into the world to bring salvation to the human race. Even before dying for us on the cross and being risen from the dead, He rescued people from different forms of evil. He healed the sick, but His sovereign power was not only over physical infirmity. Mental illnesses, demonic possessions were also subject to His miraculous power.”
“But today’s reading also shows us how limited is our human understanding of divine works, how ungrateful people may be towards their greatest Benefactor. After our Lord healed two demoniacs, the whole city came to meet Jesus and begged Him to depart from their region. Despite a great blessing He bestowed upon them, these people did not want Him to stay. To some extent, this was due to the fact that those people were pagans. As such, they could not appreciate mission of Christ. However, similar things always happen. The joyful fact is that the Lord wishes all of us to be saved. The sad fact is that not everybody wishes to respond to that willingness.        “
“After His Resurrection our Lord Jesus Christ commissioned the holy Apostles to “go and teach all the nations baptizing them in the name of the Father and of the Son and of the Holy Spirit” (Mt. 28, 19). They did so. Thus we sing honoring the Apostles: “Their line is gone out through all the earth, and their words to the end of the world” (Ps. 18, 4) Many pagan nations received the Gospel of Christ and became faithful to the Savior of the world. Presently, all the nations of the world have Christian people who follow the teaching of our Lord. But since the human nature is still imperfect and inclined to evil, there is a great resistance to the divine grace and the Word of God to be spread. Opposing the Word of God to be spread and resisting the divine grace to be bestowed upon them, people help only their enemy and act against themselves.”
”One of the forms of such opposition is persecution of the Church. St. Augustine observed the following: “The first persecution of the Church when Christians were forced to bring sacrifice to idols by threat of exile, torture and death, was carried out by force. The second persecution the Church endures is from false teachers and false brethren, and is carried out by means of craftiness and deceit. The third persecution will be from the Antichrist, and will be the most dangerous of all, because it will be accompanied by force, craftiness and deceit.” It seems like that third persecution is taking place in our days. In some places the force is being used against the Church. It was done in our old countries under the Communists. It is still done in some places ruled by Communists, like in North Korea. Recently we heard about terrible crimes against Christians committed by the Moslem extremists in the Middle East.”
”Now we also see many false teachings, as well as a lot of deceit and opposition to the true faith. Jesus is asked to depart again and again from our lives. In fact, He is asked to leave this country by some its inhabitants who don’t want prayer in schools, mentioning God’s name in the pledge of allegiance, who wish to remove God from the courts and other public places. They also became very successful in legalizing such hideous iniquities like murdering the unborn children and entering into same-sex relations. The Supreme Court of the United States approved abortions 41 years ago and it recently decided that same-sex marriage should be legalized in the whole country. What can we say?! Let these people beware! Because if they chase out God and Jesus who can make lives blessed, they invite evil into their lives, and that evil one will make their lives miserable. It is like we say in our Holy Week hymns about Judas, “Now he is leaving Christ and accepts the devil”.”
”Dear brothers and sisters! Reflecting upon all these unpleasant things, let us more appreciate the treasure of the true and orthodox faith we possess. Let us always welcome our Lord Jesus Christ into our lives, our works, our families. Let us be grateful for the salvation He performed for us and for delivering us from evil. Our Lord is the only one who can make us happy. Thus let us not ask Him to depart, but to stay with us forever.”

Following the dismissal of the Liturgy the Rector preached a brief sermon in Russian conveying the main thoughts of his English homily. He also congratulated our long-time parishioner Natalia (Dolores) Soho on the occasion of her past 84th birthday. Traditional “Many years” was sung. 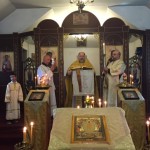 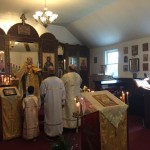 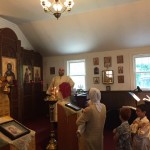 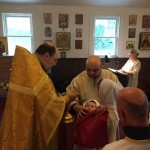 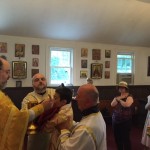 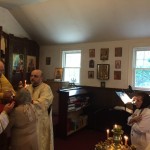