On July 24, on the 5th Sunday after Pentecost, as well as commemoration day of the Holy Equal to the Apostles Princess Olga, our Parish family had a beautiful celebration. The Divine Liturgy in our temple was served by St. George’s Rector, Archpriest Igor Tarasov. Following the Gospel lesson he preached a homily in Russian. An English translation of that homily is as follows:

“Dear brothers and sisters in Christ! Today’s Gospel concerns the casting out of demons from two possessed men (Mt. 8, 28 – 9, 1). It further tells us that the demons entered into a herd of swine and then it tells us of the suicide of those swine. We can learn some things from this Gospel reading. We should note that the people in the country of the Gergesenes who owned the swine were disobeying the Jewish law. We can presume that those people were Gentiles, but there is an opinion that they were Jews who raised the pigs for sale. If that’s the case, these people did not follow the Law of Moses which did not allow to deal with unclean animals such as the pigs. That is why they begged Christ to leave their area, virtually chasing the Son of God away. That makes us think that the disobedience of these people explains why two of them became possessed.”
“Thus, we learn that disobedience of God leads to misfortune. So as a life without true faith. These days of the second half of July we celebrate the memory of such extraordinary Russian Saints as Equal to the Apostles Olga (whose memory is today) and Vladimir (whom we will honor during the next week). Thus we celebrate the anniversary of the Baptism of Rus’. We may see that before becoming a Christian nation the Eastern Slavs living in Kievan Rus’ led a life full of misfortunes, crimes, superstitions and abuses. For instance, there was a custom to burn a wife alive along with her dead husband. The mothers could kill their new born babies, especially the girls if there were too many girls in the family. On the other hand, adult children could kill their elderly parents if they were a burden for the family. The Slavs could make human sacrifices to their gods. But after receiving Christian faith things totally changed. Although Christianity did not spread very quickly and the people for centuries retained a lot of superstitions, the people’s morals and the whole society transformed with the reception of Baptism. All who are familiar with the life of St. Vladimir know how his life changed after he embraced Christianity. Out of a cruel and thirsting for power tyrant he became people’s favorite ruler. Out of a lustful polygamist Vladimir turned into a humble follower of Christian morals. In a similar way, Princess Olga also changed after becoming a Christian.”
“Although many other people of Rus’ in the course of history still sinned, committed crimes and iniquities, the whole mindset of the Russian people changed after the Baptism. Our ancestors became a part of the European, Christian world, of the Christian civilization. God also blessed the Russian lands by allowing them to flourish under the rule of the Orthodox rulers. But when the Russian people turned away from the true faith, life in the country became full of misfortunes. Famine, wars (one of which was fratricidal), abuses, persecutions of the different social classes, economical problems – all these misfortunes fell upon the Russian land and its inhabitants. Only during the last quarter of a century the Russian nation began to return to its Christian roots, to the true faith.”
“But the lesson of today’s Gospel is also important for every nation. If a nation lives in true Christian faith, cherishes right values and obeys the God’s law, then it enjoys a relatively good and prosperous life. It becomes blessed by God. But if a nation lives in the darkness, it suffers from many misfortunes. Such a darkness can be either paganism or atheism or any false religion. Nations living with the false beliefs, with the wrong values become corrupted by sins and iniquities; they experience social tension, wars, economic problems, abuses and crimes. Unfortunately, this now happens to the American nation. God is driven away from our social and political life. Prayer and Christian spirituality is chased out of our schools. False moral values became accepted by our society and the law of God abandoned. American nation now resembles those men of today’s Gospel who kept the swine and who felt sorry for the swine perished in the lake and begged the Son of God to leave their city. Isn’t that a shame?!”
“Therefore, dear brothers and sisters, let us learn from today’s Gospel to be faithful to God, to obey His law and to cherish the true moral values given to us by the Lord. Let us also follow the example of the Holy Equal to the Apostles princes Vladimir and Olga who enlightened Eastern Slavs with Christian faith. Let us remember that their own lives changed after embracing Christianity. And the life of the whole nation of Kievan Rus’ changed after becoming a Christian country. Let us spiritually belong to that Christian family held by the holy Russian Orthodox Church, a family born from the baptismal font of St. Vladimir. In this family we will be blessed by God, protected by the Most Holy Theotokos, by the intercession of the Saints. And further we may become saved and inherit eternal life.”

Before the rite of the Holy Communion the choir prayerfully sang the hymns dedicated to the Holy Princess Olga.

After the Liturgy dismissal the Rector preached a short sermon in English stressing the main ideas of his Russian homily. He then congratulated our Warden and Choir Director, Olga Roussanow, as well as Olga Vnukova-Stateikin on the occasion of their name day. Fr. Igor wished them God’s blessings and intercession of St. Olga. Traditional Polychronion (“Mnogaia leta”) was proclaimed.

Following the service the Rector and parishioners continued celebrating at the trapeza table enjoying delicious meals and a nice company. The toasts in honor of the two Olgas celebrating their name day were raised. 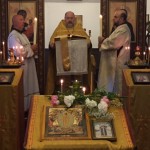 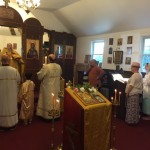 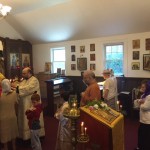 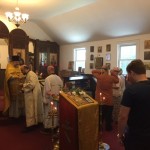 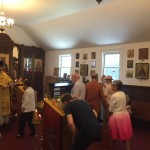 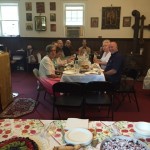