In performing divine services will it matter like the saints, Whom the God-inspired prophets Isaiah, Micah Daniel and St. John the Theologian saw “standing in the heavens next to the throne of God” (Isaiah 6:2; I Kings 22:19; Daniel 7:10; Apocalypse 7:11), Christians similarly should not sit during divine services, but stand.
The custom that Orthodox Christians stand during prayer and church services is not only a representation of spiritual service in the Heavenly Church, but also in the Church of the Old Testament. 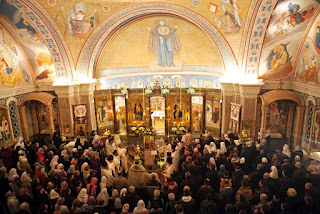 In the description of the blessing of Solomon’s temple it is said: “The Levites and all the singers, being arrayed in white linen and having cymbals and psalteries and harps stood at the east end of the altar” (II Chronicles 5:12); “All the congregation of Israel stood” (II Chronicles 6:2).
Another example from the Bible occurs in the description of the reign of Josaphat. In order to protect his homeland from the Ammonites and the children of Moab, he “stood in the congregation of Judah in Jerusalem, in the house of the Lord before the new court. And all Judah stood before the Lord, with their little ones, their wives, and their children” (II Chronicles 20:5, 13). 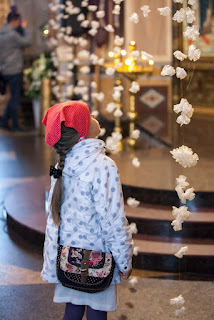 Ezra and Nehemiah, speaking of the services of the Jews after the Babylonian captivity, say: “And they set priests in their apparel with trumpets, and the Levites the sons of Asaph with cymbals, to praise the Lord, after the ordinance of David, King of Israel” (I Ezra 3:10); “And the Levites stood according to their rank and cried with a loud voice unto the Lord their God, and the Levites caused the people to understand the law; and the people stood in their place” (Nehemiah 9:4,5; 8:7; also Matthew 6:5).
To stand during prayer was thus a customary rule among the Jews, as is proven in their writings, in the manner of the Heavenly and the Old Testament Church, Orthodox Christians have maintained the custom, since apostolic times, of standing during divine services. The correctness of such a practice is evident from New Testament scripture, where we find the words of Christ: “When ye stand praying” (Mark 9:25), and in apostolic tradition, where it is often proclaimed “Let us stand well.” 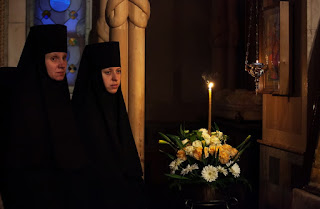 Christians, according to the apostolic teachings, all had to stand during the reading of the Gospel and the “Liturgy of the Faithful.” During other readings and homilies some would stand, others would sit. Tertullian, in the year 190 A.D., mentions the practice of standing during services. He says: “Some, in preparation for prayer, throw off their cloaks, and some think it their duty not to stand, but to sit, and we are not to imitate these. It is especially improper to pray while sitting at the very time that a multitude of angels stand before the face of the Lord in fear and trepidation; sitting shows that we are somehow praying unwillingly, carelessly, in a lazy manner.” Blessed Augustine, when discussing standing in church, says: “Moved by fatherly love, I have advised those who have an affliction of the legs, or are burdened by other sickness, that they should sit quietly and listen attentively during lengthy readings. But now even some of our healthy daughters think that they should do this all the time…. Even worse, they engage in idle talking not listening themselves, nor allowing others to listen. Thus, I ask you noble daughters, and implore you with fatherly concern, that none of you should sit during readings or homilies, unless a profound weakness of the body forces you to do so.”
In the early works of the Holy Fathers a reverent attitude during services was shown to be an important and sacred duty. In one such writing it says: “One must stand and not look around, nor lean against a wall or pillar, nor stand with a cane, nor shift one’s weight from one foot to the other.”
To stand before God and His holy saints during the church services is the only acceptable posture for the faithful, both for the ones who art serving, and the ones praying, for does a servant sit before his master The faithful are all servants of the Lord, redeemed by His blood (Luke 17: 10; 1 Cor. 6:19, 20). 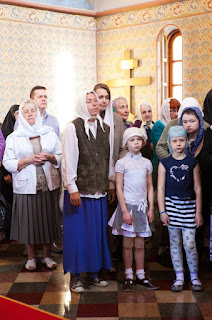 The entire life of an Orthodox Christian, according to the Scriptures should be a continuous Spiritual uprightness and attentiveness toward God. The Apostle Paul says: “Watch ye, stand fast in the faith” (I Cor. 16:13); ”Stand, therefore, having your loins girt about with truth (Ephes. 6:14); “Stand fast in the Lord, my dearly beloved” (Philippian 4:1). If a Christian must always stand on guard spiritually over his salvation then he must do so even more during, the divine church services, which serves as an expression and an enrichment to private everyday service to God. If the spirit of the ones serving and praying strives toward the Highest, will it not also lift up the body which is subject to it? Standing during church services shows us to be humble servants, ready, attentive and willing to serve God. Not unlike the Old Testament sacrifice: the faithful, standing and becoming fatigued during services, themselves symbolically become offerings to God, as the Apostle says: “Present you bodies a living sacrifice, holy, acceptable unto God, which is you reasonable service” (Romans 12:1).
From Orthodox Life, Vol. 33, No. 6, pp. 48-49. This is an excerpt from the book The Concern of the Orthodox Church for the Salvation of the World by Rev. G. S. Debolsky. Translated from the Russian by Maria Naumenko.
Source: http://orthodoxinfo.com/praxis/whystand.aspx