On February 12, on the Sunday of Prodigal Son, as well as feast of the Three Hierarchs, Basil the Great, Gregory the Theologian and John Chrysostom, we had a nice celebration in our parish church. St. George’s Rector, Archpriest Igor Tarasov served the Divine Liturgy. After the lessons from the Sacred Scripture he preached a homily in Russian. An English translation of that homily is as follows:

“Dear brothers and sisters in Christ! Today is another Sunday preparing us for Lent. It tells us about the Prodigal Son, giving us a perfect example of repentance. “Open me the doors of repentance,” – the Church is praying these days of the preparation for the saving time of fast. It is for us now to understand how much important is to practice repentance.”
“Today we also celebrate a memory of the Three great Hierarchs and Teachers of the Church, St. Basil the Great, St. Gregory the Theologian and St. John Chrysostom. Those holy men lived in the 4th and 5th century and did a lot to define the teaching of the Church. All three of them were revered by the Christian people and each one of them had a day of commemoration in the month of January. However, after several centuries some pious people began to consider St. Basil to be more important, yet others venerated St. Gregory more than other hierarchs, and, finally, St. John also had his own followers. A great number of Christians became divided in their veneration. But all three Hierarchs appeared in a dream to some pious bishop named John and told him that all three of them are equally blessed by the Lord and should be equally venerated by the Christian people. Some time after that appearance the Church introduced a new holy day to honor those three Hierarchs together. This feast we celebrate today. The Three Holy Hierarchs resemble of the Most Holy Trinity being united by one faith and one spirit but being three different persons. As such, they had different personalities but served one purpose of glorifying God and ministering to the Holy Church. In the same way all members of the Church are different, but together we represent a unity in faith.”
“But if all of us are different in our personal traits, we are all similar in one thing – all of us commit sins and need to repent. If last Sunday we could say that most of us could not relate to the Pharisee and to the publican, because those two men are the examples of some extreme way of life, today we should acknowledge that all of us resemble the Prodigal Son. We are all like him. This is due to the whole condition the human kind has – the condition called sin. As the Prodigal Son from today’s Gospel parable, the human race journeyed to the far country, away from God. And it is able and it should come back to the Father’s house.”
“The Almighty and all-merciful God is the Creator of man. Man is God’s most final creation. We were made according to the God’s image and likeness. Thus, we are the children of God, and God is our Father. We were created good and perfect, and we could eternally stay at our Father’s house, in paradise. But like the younger son in today’s parable, we left our home. Enjoying the free will, an ability to choose, having our portion of the Father’s inheritance, we decided to leave Him. Adam and Eve disobeyed God and were driven away from paradise to a far land of sin. The whole human race became remote from God and wasted its precious possession, the divine gifts of grace, through the sinful life. It had to endure all kinds of misfortunes, just as the Prodigal Son had to be starving in the far country. But the Son of God, our Lord Jesus Christ came to that land of misery and redeemed the man who was enslaved by sin. He came to restore the fallen image of God the Creator in us. He showed us the way of coming back to the Father’s house. And He ensured us that the doors of that house are now open to us. More than that, the loving Father is expecting us and is willing to run to meet us and to embrace us! Now, through Him, we acquired back the right to call God “the Father” and use the Lord’s prayer beginning with the words “Our Father”.”
“To complete such a safe return home, we need to follow our Lord’s instruction of repentance. Only the doors of repentance will lead us to the Father’s house. There is no other way. And the image of such repentance is shown in the conduct of the Prodigal Son. We first need to come to our senses, as the Prodigal Son “came to himself”, and realize our sinful state. Then we have to come to a decision to repent, to return to the Father. Then we must arise, we must act upon our resolution. And we must return, come back, repent, confess our sins and ask forgiveness. We have to humble ourselves and declare: “Father, I have sinned against heaven and before you, and I am no longer worthy to be called your son!” (Lk. 15, 21). Then, the all-merciful Lord will accept our repentance, will embrace us with His love, enrich us with His grace and order to begin a celebration in our honor.”
“Therefore, let us begin loving and practicing the saving deal of repentance. Let us seek the doors of returning to the Father’s house, our home and hope to meet our loving Father at the steps and to enjoy His eternal blessing.”

During the time of preparation for the Holy Communion the choir prayerfully performed the penitential hymns as well as the hymns dedicated to the Three Hierarchs.

After the Liturgy dismissal the Rector preached a short sermon in English stressing the main ideas of his Russian homily. He also congratulated a young parishioner Maria on the occasion of her past name day, as well as her past birthday. Traditional Polychronion was proclaimed.

Our celebration continued during the coffee hour when the Rector and parishioners enjoyed delicious meals and a nice company. 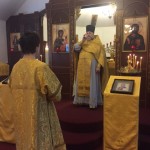 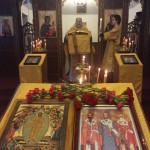 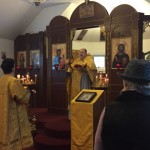 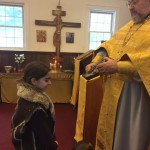 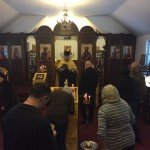