On February 26, on the Cheesefare Sunday, we had a nice and prayerful celebration in our parish. Rector of St. George Church, Archpriest Igor Tarasov served the Divine Liturgy. After the reading from the Gospel he preached the following homily in English:

“Today, on Cheesefare Sunday, on the last day before the beginning of Lent, the Holy Church commemorates the expulsion of the first man from paradise. This remembrance is offered for our spiritual reflection, so we could become aware what we lose when we commit a sin. Adam, being the first man and God’s favorite creation, had everything to enjoy eternal blessedness because he was with God. Adam was given the only commandment: to abstain from the forbidden fruit. This was a commandment of obedience and abstinence. And it was not difficult to keep because there were a lot of other fruits in the Garden of Eden which Adam could eat and enjoy. But the enemy of the human kind tempted Adam sowing the seed of distrust to God in Adam’s soul. He made the first people think that they could live without God and become “like gods” themselves.”
“This is an insane, a futile, a disastrous, and a terrible idea that man can exist without God!”
“But the devil tempted the first people and said to them, “Did God tell you the truth? No! If you disobey Him, you won’t die, but become like gods”. And first people believed the devil. They decided to violate God’s commandment. And they did.”
“Dear brothers and sisters! This Lent that starts tomorrow is given to us to teach those two important virtues, the virtues of obedience and abstinence. And we could learn how to follow them through repentance, through the awareness of our sins. Such awareness was offered to Adam and Eve by God Himself. He did not expel them from paradise right away when they committed their sin. He spoke with them and attempted to incline them to repentance. But Adam became afraid and, instead of asking for forgiveness, began to justify himself saying that it is not his fault. He said that the wife God gave him, she brought the fruit, so he ate. Thus Adam did not see that he was guilty, but he blamed his wife and he also blamed God who gave him the wife.”
“Very often we also complain about our life and blame others for our misfortunes. We blame other people with whom we interact in our life. We say that it is their fault. Or we blame the circumstances of our lives. But we cannot choose the time and place of our birth. If we were born in this age, from these parents, then it was God’s will. And if we are unhappy with God’s will, we repeat Adam’s fault. And we may even dare to say that it is God’s fault that we commit sins.”
“In a similar manner, when God spoke with Eve, expecting her repentance, she also failed to ask for God’s forgiveness. She blamed the serpent. She said, “This is the devil’s fault, not mine!” This can also remind us, dear brothers and sisters, of how we blame the devil for our sins. We blame him and we forget that the devil is not able to force us to sin. We ourselves decide. And if we did not wish, we would never commit a sin.”
“Therefore, the first man and the first woman did not have a spirit of repentance, so their connection with God became broken. And thus because of violation of God’s commandment the sin came into this world, and along with the sin there came death. This happened because when Adam and Eve were expelled from paradise, they have lost the main thing – the communion with the Source of life. Therefore, the diseases, sufferings and death came into the world. This is why in these days before Lent the Church is reminding us about those biblical events, so in them we may see the history of our own falls. In them we should see our own sins. And seeing them, we should do what Adam and Eve failed to do – to repent.”
“The all-merciful Lord is expecting our repentance. He opens to us the doors of repentance and calls us to unite with Him. Dear brothers and sisters! Let us hear that call! Let us ask for His blessing for the coming time of Lent, a time so needed for our improvement and purification.”

The choir beautifully performed the hymns of repentance at the time of the preparation for Holy Communion.

Following the Divine Liturgy the Rector performed Vespers with the Rite of Forgiveness. After the singing of the Great Prokimenon he changed his priestly vestments to the Lenten color of black.

After the Vespers dismissal the Rector preached a sermon in Russian which was a short version of his homily preached at the Liturgy in English. After finishing the sermon he asked for forgiveness bending his knees. The parishioners also knelt down and asked their pastor for forgiveness. Then each one of the faithful could come to the Rector to kiss the cross and to express the forgiveness.

Following the services of this special day the Rector and parishioners joined at the Blini Lunch. We enjoyed delicious meals, especially the blini, nicely prepared by our ladies. 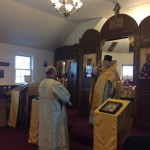 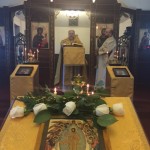 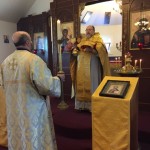 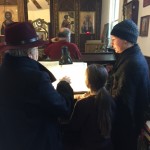 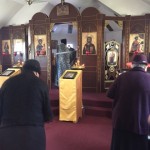 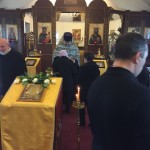