On August 20, on the 11th Sunday after Pentecost, Rector of St. George Church headed the Divine Liturgy at our parish temple. After the reading from the Holy Gospel he delivered the following homily in English:

“Today’s Gospel lesson tells us a parable about an unmerciful servant who owed a lot the king, but could not forgive a much lesser debt of his fellow servant (Mt. 18, 23-35).”
“Recently we celebrated Transfiguration of our Lord. Jesus Christ changed His appearance before His disciples, showed them His divine glory, revealed His true self. In today’s Gospel the unmerciful lender also reveals his true self. He shows that he may be very respectful and polite with his king whom he owns a huge amount of money, but when he sees another servant, just like him, who owns him, he turns into a mean and arrogant villain. He chokes that poor person, demanding the money back and throws him into a prison. Just minutes before a man who begged for mercy, becomes himself unmerciful. Just a moment prior a person was bowing before the king paying respect and showing that he is a kind individual. Now he turns into a monster. This is also some kind of transfiguration, transformation, change. It reveals who that servant really was.”
“Very often this kind of changes happen to the people. They behave nicely with some, but show their arrogance with the other. A famous Russian writer Chekhov very nicely described this kind of behavior in his short story called “The Chameleon”. In that story a small town police officer is investigating an accident which involved a dog bite. Some dog bit a person, and the policeman is trying to find out who is the dog’s owner. First he is angry about that dog, but when someone tells him that the dog belongs to a general, the policeman totally changes his attitude and is trying to defend the dog. Told later that the dog is not general’s, that policeman becomes angry with the dog again. This is why that author of the story calls him a chameleon, for chameleons change their color depending on the color of the environment.”
“This sin is called hypocrisy. Hypocrites were especially chastised by our Lord Jesus Christ. Hypocrisy is a sin against other people and against ourselves. Our Lord desires us to wear our true face and to show it to the others.”
“We are all humans and we should have love and solidarity among ourselves. Our Lord Jesus Christ became the Savior of the whole humanity. We all are in the same position. Yet today’s parable tells us how often people act against themselves, against others. It teaches to do the opposite. Our Lord warns us that we will be punished like the unmerciful servant. “So My heavenly Father also will do to you if each of you, from his heart, does not forgive his brother his trespasses”(Mt. 18, 35). Because God forgives us, we in return are obliged to grant this gift of forgiveness to others. Especially, we should do it considering that we all are humans and as such, may make mistakes, may commit sins or trespasses. When each Christian forgives from his heart, true reconciliation and healing come to the Christian community, the Church. And if every person would also follow this rule, true peace would dominate in the human society.”
“Therefore, let us truly fulfill what we say every time when we recite the Lord’s prayer. Let us truly do what we are supposed to do because we state: “And forgive us our trespasses as we forgive those who trespass against us”. Notice that in the Lord’s prayer we say nothing about love. We are supposed to love one another, but the love in the Lord’s prayer is in the words of forgiveness. If we love, we are ready to forgive. Let us forgive, be merciful and understanding. Let us show others our true face, avoiding being hypocrites. But let our faces shine with the grace of our Lord.”

Following the Liturgy dismissal the Rector preached a short sermon in Russian to stress the main thoughts of his English homily. 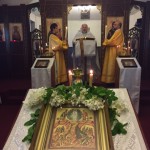 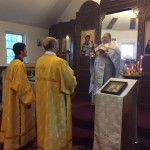 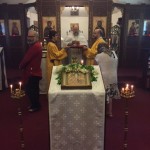 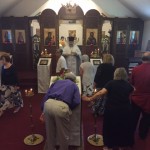