On August 27, on the 12th Sunday after Pentecost, as well as Prefeast of the Dormition of the Most Holy Mother of God, our Rector, Archpriest Igor Tarasov served the Divine Liturgy at St. George Church. Following the reading from the Holy Gospel he preached the following homily in English:

“Today is the 12th Sunday after Pentecost and we listened to a Gospel story about a rich young man. We heard what happened: the young man walked away sorrowful. He failed to acquire eternal life. What was wrong with him?”
“First of all, the young man had a wrong question because he had a wrong attitude. He wanted to follow God and he was keeping the Commandments as he knew them, but he was thinking in a small way, but God is big. That young man was thinking in little boxes, and the Christian life does not fit in boxes. The man says, “All these things I have kept from my youth. What do I still lack?” (Mt. 19, 20). The Lord tells him. He has asked for it; he is going to receive it: “If you want to be perfect, go, sell what you have and give to the poor” (Mt. 19, 21).”
“The young man went away sorrowful because the giving up his wealth did not fit in one of his boxes. This was a terrible tragedy. This was a man who was sincere; this was a man who wanted to be saved. This was a man who was doing things that few people even try to do, and he was still not saved. His failure was all because of his possessions. It was a tragedy that he walked away. He did so much and gained so little.”
“Here the Gospel is concerned with material wealth. Our lives are concerned with this very much. The love of money, love of possessions, love of comfort that comes from money, love of “security” – all this strangles most Christians. It should concern and strangle most Christians because most churches are small and poor. It should be not this way.”
“The Church has never looked at wealth as inherently evil. It is a holding on to wealth that is evil. A person who is seeking salvation and eternal life can possess wealth but he would use it to make the world better, to support his Church, to help the needy and to do many possible good works. Such wealth would not stop a man to enter into the Kingdom of God. But if possessions make us their slave, we are in a great danger of losing our salvation.”
“Dear brothers and sisters, let us not be like that rich young man. The scary thing about him was that he had virtues. He was zealous, he adhered to the law, and he even had desire to know more, and yet he was not saved, because of his adherence to riches. Don’t think that you are immune to this. I doubt that anyone here present follow everything better than that rich man because no one among us can say that he or she kept all the Commandments. There is no one among us that can say that they could stand before God without shame. We still and always have work to do, not only to keep the Commandments, but also to support our church, to be a cheerful giver.”
“The Christian life is a totality. The great mistake of the young man was that he saw salvation as limited set of things that he could do – “1,2,3, a. b, c”, and God said, “All of it”. What should I do? All of it. This a very serious task for us – to embrace all. This is why the Church in its wisdom tells us to work a little bit at a time. You cannot become holy in one day, but if you struggle, it may occur in your lifetime. But even if you won’t become holy in your lifetime, God may still save you if you struggle, and there will be a room reserved for you in His mansions. Dear brothers and sisters! Don’t allow yourself to be condemned because of something as foolish as attachment to money and to all other material things. May the Lord by the prayers of His Blessed Mother help us and save us!”

The choir was beautifully singing the hymns during preparation for Holy Communion.

Following the dismissal of the Liturgy the Rector preached a brief sermon in Russian to address the main thoughts of his English homily. 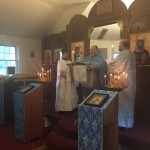 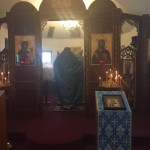 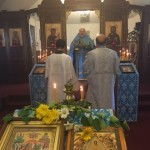 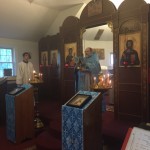 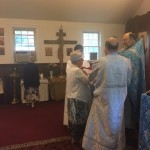 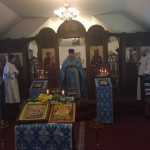