On April 15, on the Sunday of Antipascha, also known as Sunday of St. Thomas, we had a nice service at St. George Church. Our Rector, Archpriest Igor Tarasov served the Divine Liturgy in our temple. Following the Gospel lesson he preached the following homily in English:

“The joyful week of Pascha, the Bright week has passed, and we celebrate Sunday after Easter. It is called St. Thomas Sunday, or Sunday of the Antipascha. That Greek word does not mean that it is something “against Pascha”, it is rather something “across Pascha”, it is the next Sunday standing across Pascha in the calendar. But a true and more precise meaning of that word is some kind of “substitution for Pascha” or a “renewal of Pascha”, of the feast of the Resurrection of Christ. After one week of Pascha we gathered again to be assured again that the joy of the Resurrection of the Lord is still with us. And today we hear the Gospel story about Holy Apostle Thomas who also made himself sure of Christ Resurrection.”
“How did it happen? When the risen Lord Jesus Christ appeared to His Disciples, they rejoiced seeing Him. He rendered them His peace, He sent them to preach His Resurrection, He gave then\m His Spirit, so they could loose and bind the sins of men. Apostle Thomas was not present then along with his brethren, the Apostles. And when he joined them and saw how they joyfully tell that they saw the risen Christ, he did not believe them. Perhaps, seeing their joy and excitement he thought that because of their agitation they only imagined Christ to be risen. Apostle Thomas said, “No!”“Unless I see in His hands the print of the nails, and put my finger into the print of the nails, and put my hand into His side, I will not believe” (Jn. 20, 25). Some people may say, “What a stubborn man! Why didn’t he believe?””
“But if you think about it, you may realize that the stubbornness of Thomas can be understood and justified. In a Stichera of today’s feast we sing, “O blessed unbelief of Thomas…” Thus his unbelief was pleasing the Lord and saving, in addition, it was sincere. If many of us had such a blessed unbelief of St. Thomas, we would avoid many mistakes in spiritual life. Thomas did not believe the other Apostles not because he did not believe in God, but because he was afraid to make a mistake in his faith. He did not wish to be deluded or deceived because of the human feelings and emotions. He was seeking the Truth.”
“Unlike Thomas, we often become gullible. Very often we may be attracted to any account about some “healer” or a “clairvoyant”. Even the Church people often become fooled. And those who are not living the Church life are very easily deceived when they hear about some fortune tellers like the famous Vanga, about some healers who “charge the water” from the TV, about astrology and other similar things. And thus people forget about Christ, about the Church, about the Commandments.”
“But Holy Apostle Thomas teaches us to have a believing but sober mind. Such a mind has to be based on the holy Orthodox faith. For Thomas, in fact, was not an unbeliever but a believer who was seeking to confirm his faith. And when the next time Jesus appeared to the Disciples, and Thomas was with them, he had a chance to confirm his faith. Jesus invited Thomas to examine His body with the wounds of crucifixion. What did Thomas do? He worshipped Christ saying, “My Lord and my God!” (Jn. 20, 28). He did not need to stretch his hand to touch Christ. His heart filled with the grace of the Holy Spirit recognized the risen Lord.”
“Dear brothers and sisters! The same thing occurs when unbelievers say to us, “Why do you tell us about Christ? How can you believe in Him? Have you ever seen Him?” And we may respond because through the grace of the Holy Spirit it becomes revealed to our hearts. Just as Thomas believed we may believe. According to or own spiritual experience we know that Christ was risen. We feel it when we pray in the temple. We feel His help in our life when we pray to Him. And such a spiritual experience is given to us through the holy Church. God is with us because we are in the holy Orthodox Church. God is with us because we are being sanctified by the Holy Mysteries. God is with us because we strive to live according to His Commandments.”
“And so, Jesus Christ talking about His Church says to Thomas, “Because you have seen Me, you have believed. Blessed are those who have not seen and yet have believed” (Jn. 20, 29). We became worthy of such a high name. The Lord calls us who never saw Jesus in person, “the blessed ones”. Thus what a great name the Lord is giving to us, Orthodox Christians!”
“Dear brothers and sisters! Let us keep and cherish that greatest inheritance of ours, our holy faith, a faith that grants us eternal life. Let us fear to be gullible and to draw away from the Church of Christ. Let us be afraid to be deceived by the false teachers. Let us glorify our risen Lord Jesus Christ both by our words and by our lives!”

The choir beautifully performed the Apostichas of Pascha and of St. Thomas Sunday during preparation for Holy Communion.

Following the dismissal of the Liturgy the Rector preached a short sermon in Russian explaining the ideas of his English homily. Then he distributed the Artos among the parishioners. 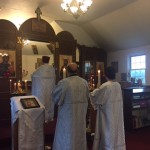 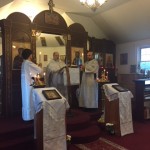 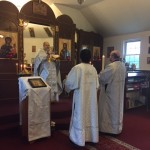 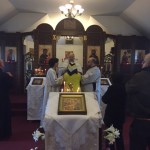 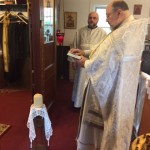 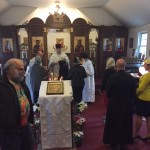