On April 22, on the Sunday of the Myrrh-bearing Women we had a beautiful service at St. George Church. Our Rector, Archpriest Igor Tarasov celebrated the Divine Liturgy. Following the reading from the Holy Gospel he preached a homily in Russian.

In his homily the Rector addressed the special ministry of women in the Church. Holy Myrrh-bearers were serving Christ along with the Apostles. However, they had a different kind of ministry: if the Apostles were elected to become the messengers of the Gospel and to perform the service which is now known as the ministry of the bishops, the ministry of the Myrrh-bearing Women was to help and to serve in different needs of Christ and the Apostles. In Christian and spiritual setting should be no discussion of such secular issues as “gender rights” because all these human perceptions are limited and relative. Today’s Gospel lesson is telling us that Myrrh-bearing Women were the first ones to learn about the Lord’s Resurrection, not the Apostles. In the human and secular world we are accustomed to call women “a weak gender”. But the Holy Myrrh-bearers were not afraid to go to the Lord’s Tomb to anoint the body of Jesus while His male Disciples were frightened and gathered secretly, behind the shut doors. This shows that human stereotypes are often relative.
The only concern of the Myrrh-bearing Women was who will roll away the stone from the tomb. This is another example of one of the typical human worries which sometimes are in vain. As we know, the stone had been already rolled away because Christ has risen from the dead.
Therefore, we Christians should seek what is not limited or relative but what is eternal and spiritual. And the history of the Church tells us that Christian women were very dedicated to preserve faith and thus fulfilled that ministry of the Myrrh-bearers. In the years of Communist yoke in the old country Holy Orthodox faith was kept first of all by women, especially the elderly grandmothers (the “babushkas”). Very often they baptized their grandchildren and brought them to the Church.
The Rector called the parishioners to pray to the Holy Myrrh-bearing Women to help us to preserve our faith and to hand it over to the next generations.

Following the dismissal of the Liturgy the Rector preached a short sermon in English stressing the main thoughts of his Russian homily. He also congratulated our ladies on the occasion of this Sunday which is the Orthodox Women’s day. Traditional Polychronion (“Mnogaia leta!”) was proclaimed.
Then the Rector congratulated and proclaimed the Polychronion to the parishioners Vladimir Piankov and Natalia Tsyvilyova on the occasion of their past birthdays.

Our celebration continued at the trapeza table where the Rector and parishioners enjoyed delicious meals and a nice company. The toasts to our ladies and to the birthday celebrants were raised. 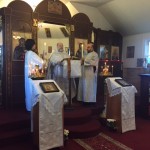 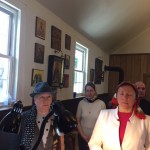 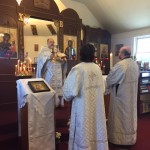 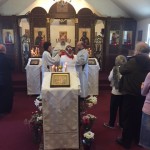 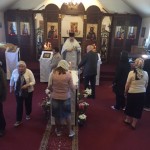