On July 14 we held celebration of the feast of the Major Holy Apostles Peter and Paul which had been transferred to Saturday. The Rector of St. George Church, Archpriest Igor Tarasov served the Divine Liturgy at our parish temple. Following the Gospel lesson he preached a homily in Russian.

The Rector pointed out that Holy Peter and Paul had different views on their Apostolic ministry and argued about their differences. We may say that Peter was conservative and Paul was more progressive, or, as many of us say, “liberal”. People usually are divided in that manner. But Holy Major Apostles, although they had their differences, never divided the Church and never separated from the community of Christ. And their feast shows that both Peter and Paul died on the same day, being killed because of the persecution of Christians in Rome. This is an important lesson for us: we may hold different, even opposite views but should be united in our Orthodox faith and our belonging to the Church. We should adhere to the firm and solid faith declared by St. Peter in today’s Gospel lesson: that Jesus is the Christ, Son of the living God. And we should not create schisms and hostilities because of our differences. Therefore, we have to ask that the Lord through the prayers of the Holy Apostles Peter and Paul grant us unity in spirit, so we may be led to eternal Kingdom of God.

Our cantor Olga Roussanow nicely performed hymns in honor of the Holy Apostles.

Following the dismissal of the Liturgy the Rector and the altar server performed a rite of glorification before the icon stand in the middle of the church singing the troparion, kontakion and magnification of the feast. The Rector also preached a short sermon in English stressing the ideas of his Russian homily. 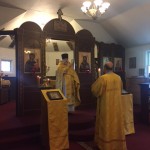 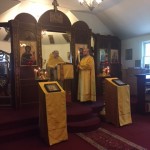 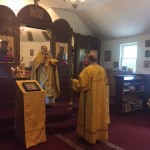 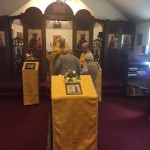 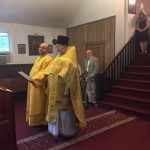 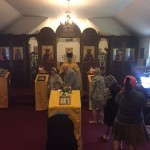