On July 8, on the 6th Sunday after Pentecost, St. George Parish family held a nice celebration at our church. Our Rector, Archpriest Igor Tarasov served the Divine Liturgy. Following the Gospel lesson he preached the following homily in English:

”Dear brothers and sisters! Today’s Gospel tells us about a miraculous healing of a paralyzed man. Before healing that man our Lord Jesus Christ proclaimed that the sins of that man are forgiven (Mt. 9, 2). Some Jewish elders whom the Scripture calls the Scribes were present there and began to think that Jesus is blaspheming. Only God can forgive sins. Knowing of their thoughts the Lord rebuked them saying that not only sins of that man are forgiven, but his body will also be freed from the infirmity. He tells the paralytic to stand up and walk, and the paralytic does stand, takes his bed and walks to his own house (Mt. 9, 6).”
”This reading teaches us that our illnesses are caused by sin. Mainly, of course, our infirmities are not the consequence of our personal sins, but rather the effects of the sinful state, a sin that is all around us in the world and to which we are subject.”
“The doctors tell us that many illnesses are the result of bacteria coming from the world and attacking a weakness in our bodies. Such a weakness may be inherited through what we now call genes. Or perhaps that weakness comes in old age when our bodies began to fail as they wear out. In both cases illness is caused by a corrupted state of humanity where a spiritual failure caused physical imperfection.”
”On the other hand, a sickness may be the result of overeating or an unhealthy diet. Then again it is a result of sin called gluttony. It may be the result of using of alcohol or drugs. Then it is a sin of drunkenness or debauchery. Some of us get sick because of a lack of physical activity. Then it may be a sin of laziness. Finally, our illness such may also be the result of a state of mind. Then various sins of our mind, sins of thought and heart make us unhealthy. This is why today’s Gospel does not tell us about any particular cause of the man’s illness. But it shows that he was paralyzed not because of bacteria, old age, unhealthy diet or poor mental state, but because his sins were not forgiven.”
“Our body and our soul are very much connected. They both compose a human person. This is why we should always remember to take care of ourselves, to love ourselves. That means to love our souls and our bodies. If our souls are healthy, not burdened by unforgiven sins, our bodies would be much healthier. And on the opposite, if we live in sins and vices, we should not expect our bodies to be well.”
“Today the Orthodox Church honors the holy memory of Venerable Martyr Febronia who was a nun in some Eastern land. She was persecuted and tortured by the Roman officials. One of those torturers who was especially fierce and cruel died soon after he put Febronia to death. Other his companions even converted to Christianity but that one was very angry and evil. So he died of that anger. Of course, it was God’s punishment but the cause of death was that man’s mental state which influenced his physical health and resulted in his death.”
“Having an example from the life of today’s Saint and coming to an understanding that our bodily weaknesses are the result of our sin, let us ask the Lord’s help. Let us ask Him to forgive our sins in the holy Mystery of Confession. Let us use that great medicine, that healing Sacrament. Unfortunately, this Sacrament is in a great neglect in our times. Protestants don’t have it. Catholics have it but don’t use it much. Even many among many Orthodox it is in neglect, like it is seen in the Greek or Antiochian parishes. In our Russian parishes Confession is used but many people don’t know how to confess correctly; they like to have a conversation with a priest, to tell him about his life but don’t confess their actual sins. Clergy should teach faithful to do that.”
“Therefore, dear brothers and sisters, let us use the Holy Confession in a right way to truly repent and receive absolution of our sins. Let us also fight our sins and bad habits to be freed from possible sicknesses of the body which may be caused by our wrong behavior. And let us then follow our Lord Jesus Christ to His eternal glory.”

The choir beautifully performed hymns in honor of St. John the Baptist whose Nativity the Church celebrated on the previous day.

Following the dismissal of the Liturgy the Rector preached a short sermon in Russian to convey the main ideas of his English homily. He also congratulated our long-time active parishioner, Natalia (Dolores) Soho on the occasion of her past birthday. Traditional Polychronion (“Mnogaia leta!”) was proclaimed.

Our celebration continued at the trapeza table where the Rector and parishioners enjoyed delicious meals. A toast in honor of Natalia (Dolores) was raised during the luncheon and a birthday cake presented for the dessert. 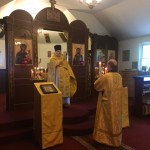 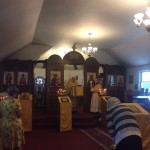 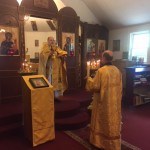 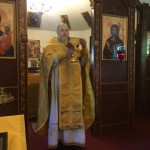 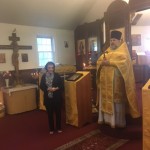 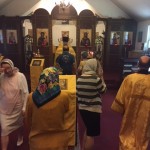 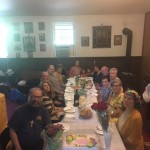 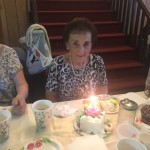