On September 2, on the 14th Sunday after Pentecost St. George Parish family had a beautiful celebration at our temple. Our Rector, Archpriest Igor Tarasov served the Divine Liturgy. After the Gospel lesson he preached a homily in Russian. An English translation of that homily is as follows:

“Dear brothers and sisters in Christ! On this Sunday again we hear a parable told by our Lord Jesus Christ to His opponents. In a similar way, it is a parable about the Kingdom of heaven. Last Sunday Jesus compared God to a landowner who planted a vineyard, and the people to the vinedressers or tenants. Today’s story compares God to a king who prepared a wedding feast for his son. Let us look closely unto that parable.”
“God desired to invite man to His heavenly Kingdom, to return him to paradise. For that reason God sent His Only-begotten Son to redeem the human race. His Son is a Bridegroom who is going to unite in a mystical way with humanity, with His Bride, the Church.”
“At first, the wedding banquet of God’s Son was prepared for the chosen people, for the Jews. Today’s Gospel lesson says that the king sent his servants to call “those who were invited to the wedding” (Mt. 22, 3). The servants here are the Prophets whom God was sending to His people. But those who were invited, as we hear in today’s Gospel, disregarded the invitation or even mistreated the king’s servants (Mt. 22, 5-6). Same was done by the Jews to God’s Prophets. Then the king commands his servants to go to the highways and invite totally different people to the wedding (Mt. 22, 8). In this way the Holy Gospel proclaims the transfer of the Kingdom of God from Jews to Gentiles. If the Jews, the chosen people, the people who were invited to God’s joyful feast, became unworthy of that generous invitation, other nations should fill the banquet hall of the King’s celebration.”
“Through holy Sacraments of Baptism and Chrismation we are brought into union with Christ. Through those holy Mysteries we are brought into marriage with the Lord, the mystical marriage of the Church with her heavenly Bridegroom, the Christ. However, being invited, even for us, does not mean an automatic stay in the wedding hall. Today’s Gospel tells us about a man who came to the marriage banquet without a proper wedding garment. He was cast out of the hall (Mt. 22, 11-13). The wedding garment, dear brethren, is the grace of God which has to be put on. For as many of us were baptized into Christ , have put in Christ (Gal. 3, 27). In the times of Jesus, a special wedding garment was given for each guest at the wedding. The host provided such garments for the guests. This is why, it was strange to see a guest who did not have a wedding garment put on. In today’s parable the king saw a man without it and asked how could he enter without a proper dress. The guest was speechless (Mt. 22, 12). In the same way, many people who became baptized lose or refuse to put on the garment of divine grace, the garment of pure and pious life. They avoid spiritual life, they refuse to attend the church, they decline reception of the Sacraments. All these things, like a wedding garment, are provided by God for us. But many of us refuse to take it. And when the Lord comes and demands an answer, we become speechless. We have nothing to say.”
“Dear brother and sisters! Hearing the parable about a wedding feast, let us be worthy of God’s invitation. Let us come joyfully to the Lord, let us attend His holy wedding. For us, every Divine Liturgy is such a wedding banquet. Let us not miss it. Let us avoid the attitude of those who declined the king’s invitation. And let us not forget to be appropriately dressed for this important occasion. Our appropriate dress, our wedding garment is our pure soul, a heart cleansed of all impurity in the holy Sacrament of confession. Let us not become speechless and then cast out into the outer darkness, but come into joy of our Lord and feast with Him in the everlasting joy of His Heavenly Kingdom!”

Since on the first Sunday of September the Russian Church holds a special day of prayer for the preservation of God’s creation, during the Litany of fervent supplication the Rector offered special petitions for that cause, as well s special prayer after that Litany.

The choir was prayerfully singing the hymns of the Dormition, the feast which had still been celebrated on that day.

After the dismissal of the Liturgy the Rector preached a short sermon in English conveying the main ideas of his Russian homily. Following that the Rector he also offered a prayer for the schoolchildren who begin their new school year. The Rector blessed our children and wished them a successful study and acquiring of knowledge. 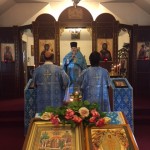 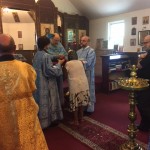 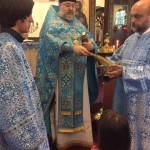 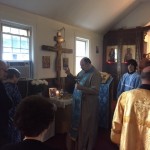