On September 9, on the 15th Sunday after Pentecost, St. George Parish held a nice celebration. In addition to the Sunday observance we celebrated feast of the Beheading of St. John the Baptist that had been transferred to Sunday. Our Rector, Archpriest Igor Tarasov served the Divine Liturgy. After the readings from the Scripture he preached a homily in English.

The Rector pointed out that in the first Gospel lesson our Lord Jesus Christ was asked a provocative question: “Which is the great commandment in the law?” (Mt. 22, 36). The Pharisees and the scribes were looking for a way to find an error in the teaching of Christ, so they asked him different questions to test Him. Jesus answered that the great commandment is to love God, and another one is to love your neighbor (Mt. 22, 37-39). In this way He emphasized that all other commandments are based on the law of Love. Those two commandments were not among the Ten Commandments we all should know but they were among numerous God’s prescriptions of the Old Testament. Thus the Jews could not pay much attention to them. However, if you look at Ten Commandments, you may see that the first four of them concern our relationship with God and the rest six Commandments are about our relationship with our neighbors. Therefore, all Ten Commandments are about love of God and of our neighbor. And the Lord stressed that on those two commandments of love “hang all the Law and the Prophets” (Mt. 22, 40).
At the same time, if we compare Ten Commandments and the two commandments of love, we may see that Ten Commandments are formulated in a negative way. They prohibit certain behavior or certain deeds. On the other hand, the commandments of love are spelled out in a positive way: they prescribe doing something good. And, of course, it is a more mature way to think and to adhere to something. However, human nature makes people needing prohibitions. Unfortunately, many people are not mature and they need to be told that certain things are forbidden. Celebrating the Beheading of St. John the Baptist we learn that king Herod needed to be told that he acted unlawfully. St. John the Baptist was fearless to tell him that and as a result the just man, the holy Forerunner of Christ was executed. Although Herod was not stopped, such reminding of the God’s law is important.
At the conclusion of his homily the Rector called the faithful to adhere to the Commandments and to be watchful. We need to remind ourselves to stop if we desire to break the Commandments. And we should warn others from violating the God’s law: in that way we could show them our real love. The Rector also asked to pray to St. John the Baptist to make us worthy of eternal life with God.

Following the Liturgy dismissal the Rector and the altar servers performed the Rite of glorification singing the troparion, kontakion and magnification in the middle of the church in honor of the feast of the Beheading of the Forerunner. Then the Rector preached a short sermon in Russian explaining the main ideas of his English homily. He also congratulated our parishioners Natalia Soho and Natalia Tsyvilyova on the occasion of their past name day. Traditional Polychronion (“Mnogaia leta!”) was proclaimed. 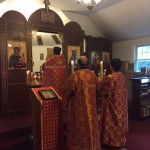 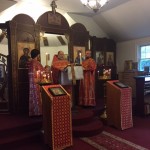 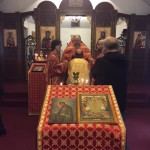 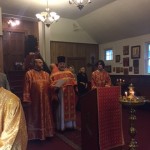 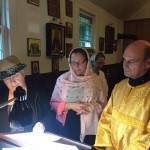 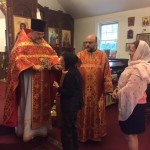