On Tuesday, September 25, clergy and faithful of greater Philadelphia gathered in St. Michael the Archangel Church to bid farewell to their long-time pastor, Mitered Archpriest Vincent Saverino who fell asleep in the Lord on September 20. Fr. Vincent labored for many years in the Patriarchal Parishes, carrying the obediences of the Rector of St. Michael’s Parish in Philadelphia, Dean of the Atlantic States and a member of the Bishop’s Council.

The Rector of St. George Church, Archpriest Igor Tarasov attended that funeral ceremony. In the absence of our Bishop, Fr. Igor, as the Chancellor of the Patriarchal Parishes in the USA, headed the burial service for our newly-departed cleric.

Early in the morning, the Dean of the Atlantic States, Archpriest John Vass celebrated the Divine Liturgy being co-served by the parish Rector, Priest Gregory Winsky and a multitude of clergy from the Patriarchal Parishes, the Russian Church Abroad, and other local Orthodox jurisdictions.

Following the Divine Liturgy, the priestly burial office was served by Archpriest Igor Tarasov assisted by all other clergy. At the beginning of the service Fr. Igor read aloud condolences to the family and parishioners of St. Michael Church from the Administrator of the Patriarchal Parishes in the USA, Bishop John of Naro-Fominsk. After the service dismissal the traditional rite of the farewell kiss had been performed by the clergy and faithful.

The church was filled with parishioners wishing to lift their prayers and pay their respects to the priest who served faithfully their parish for more than 30 years.

Following the service in the church the clergy proceeded to the cemetery where Archpriest Igor Tarasov headed the final memorial service including the Litia for the repose of the newly-departed and the sealing of the tomb.

A repast was then held in the parish hall of St. Michael Church prepared by the parish sisterhood. 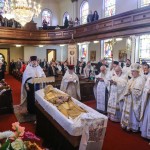 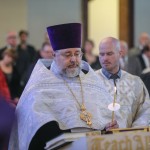 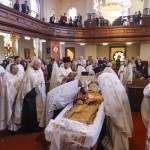