On July 15th, on the 6th Sunday after Pentecost, Rector of St. George Church, priest Igor Tarasov served the Divine Liturgy at our temple. On this day, feast of the Deposition of the precious Robe of the Most Holy Mother of God is celebrated.
Following the reading of the Gospel Fr. Igor discussed the Divine Liturgy. This was his last talk on the meaning of the main Orthodox service. He interpreted the conclusional rites of the Liturgy: Prayer behind the Ambo, the Final blessing and the Liturgy Dismissal.
After the celebration of the Liturgy Fr. Igor preached a short sermon about today’s feast in the Russian language. He recalled the history of the feast of the Deposition of the Robe of the Holy Theotokos. This happened in the 9th century when the royal city of Constantinople was besieged by the enemies. A fervent prayer of the inhabitants and the intercession of the Most Holy Mother of God through Her precious relic saved the city from the invaders. Those invaders were our ancestors, Eastern Slavs. They received a generous contribution from the city and departed. But they also wished to embrace Christian faith. Their leader, prince Askold of Kiev, became a Christian and attempted to introduce Christianity in the ancient lands of Rus’. Unfortunately, his plan was not fulfilled. But since that time our ancestors began to be acquainted with holy Orthodoxy, and Christian temples began to appear in Kiev. This was the result of the miraculous intercession of the Most Holy Theotokos who protected Christians in Constantinople and also enlightened our pagan ancestors.
Following the service our parishioners enjoyed our delicious trapeza. 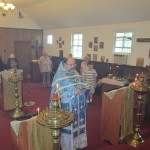 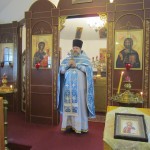 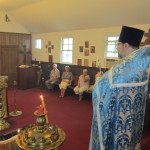 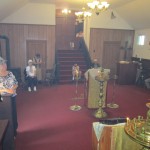 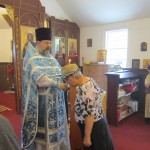