On December 30, on the Sunday of the Holy Forefathers, the Rector of St. George Church, Archpriest Igor Tarasov served the Divine Liturgy at our Parish temple. Following the Gospel lesson he preached the following homily in English:

“Preparing us for the celebration of the Nativity of Christ, the Holy Church proposes today to glorify the Holy Forefathers, to look at them by our spiritual eyes and to benefit from their spiritual example. We call the Forefathers those people who lived before the coming of the Lord Jesus Christ into the world. They were His ancestors by flesh. And such ancestors were basically all the Saints of the Old Testament.”
“The time of the Nativity Fast is a symbolic commemoration of the Old Testament times, a long period of time when the mankind was expecting the coming of the Savior. More than five thousand years passed from the moment of the fall of our ancestors, Adam and Eve, and from their expulsion from paradise until the birth of our Lord Jesus Christ. Those times are described in the Old Testament Scriptures. And we symbolically pass through that period in forty days of our fast before Christmas. And apart from today’s celebration of the Old Testament just, in this period we may find many days of commemoration of the Old Testament Prophets in our Church calendar.”
“For instance, today the Church honors Holy Prophet Daniel. In the 6th century before Christ Jerusalem was taken by the Babylonian king Nabuchednezzar who captured four noble Hebrew young men: Daniel, Ananias, Azarias and Misael. They were brought to Babylon where the king wanted them to become his servants. They were supposed to adopt the local customs and language. So, it became a time of a great test for their faith in one and true God. When the king ordered them to be fed from his own table, Daniel did not wish to eat the unclean food and convinced the king’s official to give them just fruits and vegetables. After ten days the Hebrew captives looked better than the ones who ate the king’s food.”
“This example from the life of today’s Saints is telling us about the benefit of fasting. But it also tells us that you can preserve your faith even in difficult circumstances. Even living among the people strange to the true faith, you may not lose your faith but to preserve and even make it grow. And this is an example for us who live among the majority of non-Orthodox people or even people who lately became almost faithless.”
“The Book of Prophet Daniel further tells that the king ordered to erect a huge idol made of gold and commanded all his subjects to worship that man-made image. The three Youths refused to do it because they kept the true faith in one God. The king got very angry and ordered them to be thrown into a fiery furnace. But a great miracle happened: the three young men were protected by God and the fire and heat did not harm them. This is an example of the true confession of faith shown by those three youths.”
“Thus faith in the true God was the main thing in the lives of the Old Testament Saints, in the lives of the Forefathers. According to that faith they were expecting the birth of the Messiah. That same expectation of the birth of the Savior is an important spiritual experience during these days of the Nativity Fast. We are expecting Christmas holy day and we prepare ourselves for that feast, preparing a dwelling place for the divine Child in our hearts, for the Holy Infant who came into the world for our salvation. And the whole spiritual sense of the Nativity Fast is in preparation of the human soul for the encounter with the Lord born for us.”
“As the Holy Forefathers waited for the birth of the Savior in the world, so we are now waiting for the feast of the Nativity of Christ and we are spiritually striving to purify ourselves, to improve our shortcomings, to repent our sins, to make ourselves worthy of the encounter with the Lord.”
“Dear brothers and sisters! Being blessed by the Church of Christ, let us look at those righteous men and women and let us ask for their prayers for us, the sinners, so we may worthily and with spiritual joy and benefit spend the rest of the Nativity Fast and enter into the great celebration of the Holy Nativity of Christ!”

Before Holy Communion the Choir Director, Olga Roussanow prayerfully performed hymns dedicated to Holy Prophet Daniel and the Three Youths whose memory was celebrated on that day.

After the dismissal of the Liturgy the Rector preached a short sermon in Russian addressing the ideas of his English homily. He also made some announcements concerning preparation for Christmas celebration. At the end the Rector handed presents from St. Nicholas to the parish children.

Following the Liturgy the Rector performed a memorial service (Litia) in commemoration of the newly-departed Vera Koretz. 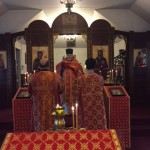 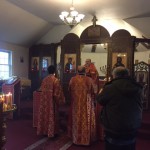 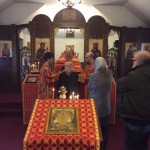 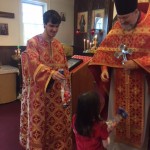 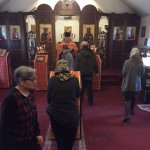 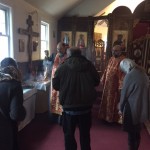