On June 9, on the Sunday of the Holy Fathers of the First Ecumenical Council, the Rector of St. George Church, Archpriest Igor Tarasov served the Divine Liturgy in our parish temple. After the reading from the Holy Gospel he preached a homily in Russian. An English translation of that homily is as follows::

“Dear brothers and sisters! On this Sunday following the Ascension of the Lord we celebrate the memory of the Holy Fathers of the First Ecumenical Council of Nicaea. We should remember that this was the first gathering of the Christian Bishops from the whole world. It took place in the 4th century. That Council adopted most of our Creed that we recite in our daily prayers and sing it during every Liturgy. Today we may wonder why those Ecumenical Councils gathered and what kind of gatherings they were.”
“We believe that the Head of the Holy Orthodox Church is Jesus Christ Himself. There is no other head. Our Lord Jesus Christ, our Savior who came into the world, became Man, lived a human life, died on the cross, risen from the dead and ascended into heaven – He is the Head of His Body, the Church. Roman Catholics believe that the head of the Church is the Pope of Rome but we, Orthodox always remember that only Jesus Christ can be the Head of His Church. But since Christ sent His Apostles to preach to different nations, they went to various countries where they made the disciples different people. Thus today we know Orthodox Christians from many nations and from different ethnic background. Holy Apostles being enlightened by the Holy Spirit began to speak different languages and they also brought the grace to the nations they preached. And in each country which became Christian local communities of the believers, local Churches were established. Some of them became known as local independent, autocephalous Orthodox Churches.”
“There are 15 such local Orthodox Churches in the world: the Church of Constantinople, of Alexandria, of Antioch, of Jerusalem, our Russian Church, then Georgian, Serbian, Romanian, Bulgarian Churches, the Church of Cyprus, the Church of Czech and Slovak Lands, the Church of Greece, Polish Church, Albanian Church, and the Church in America (OCA). All these Churches are independent and have their own hierarchy and their own first hierarchs – either Patriarchs, Metropolitans or Archbishops who head that local Church. We know that our Russian Church is headed by His Holiness, Patriarch Kirill. Orthodox Church in America is headed by Metropolitan Tikhon. They are the heads of the local Churches but the Head of the whole, Universal Church is Jesus Christ.”
“All these Churches hold the same holy Orthodox faith. They are independent in their administration and their internal life but they have the same faith, the same teaching. They all belong to the same Holy Catholic and Apostolic Orthodox Church. And to define the truths of faith Universal Church called Ecumenical Councils. The decisions of those Councils are mandatory for all Orthodox people, for every local Orthodox Church. We believe that Ecumenical Councils are led by the Holy Spirit., and that their decisions are inspired by Him. If Catholics believe that the Pope of Rome is infallible when he preaches on faith or morals, we Orthodox believe that not a particular person but the whole Church is infallible, cannot make a mistake because the Holy Spirit would not let her to fall into an error.”
“There were 7 Ecumenical Councils in the history of the Church. At each of the Councils the Holy Fathers condemned certain false teachings called heresies. All the heresies of those times were condemned by those Councils and the true teaching of the Orthodoxy defined. After those Councils many new heresies emerged, and who knows, maybe there will be called a new Ecumenical Council to condemn them and to teach us again. Some attempts to prepare such a Council are being made.”
“Today we honor the Fathers of the First Council who despite the pressure from different powerful people and parties made right definitions of faith. Inspired by the Holy Spirit they declared the truth that our Lord Jesus Christ is true God, one in essence with God the Father.”
“Let us then glorify the Fathers of the First Council. Let us pray to them that despite various modern heresies we may be faithful to our Lord Jesus Christ who established His Church on the earth strengthened by the holy hierarchs of the Councils. Let us give Him glory for the ages of ages!”

The choir beautifully performed the hymns of the feast of the Ascension and dedicated to the Holy Fathers of the First Council.

Following the dismissal of the Liturgy the Rector congratulated our youngest parishioner, Elena Malyshev and her family on the occasion of her past name day. Traditional Polychronion (“Mnogaia leta!”) was proclaimed. 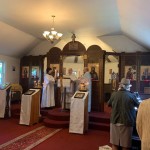 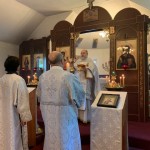 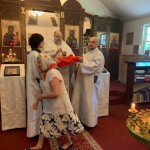 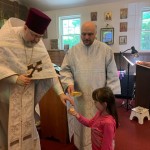 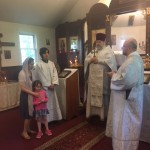 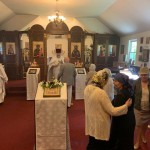