On June 16 of this year all Orthodox Christians celebrated Pentecost, the feast of the Most Holy Trinity. Our St. George parish family had a beautiful celebration in our temple. The church was nicely adorned with greenery. Our Rector, Archpriest Igor Tarasov served the Divine Liturgy.

Following the reading from the Holy Gospel the Rector preached a homily in Russian. He addressed our Christian faith in the Most Holy Trinity, in One God in Three Persons. Such faith is important because it opens for us a way to salvation. Those who know that God is one may have a fear of God but such a fear is not that saving fear that is described in the Scripture. Such a fear is not caused by one’s love of God. That fear leads to despair. That kind of faith only in one God is seen among the Muslims. And they do not recognize Jesus Christ as the Son of God and God. They fear one God but are not able to approach Him, to be with Him. We Christians tremble before one God, but we also rejoice that we are united with Him through His Son, Jesus Christ who became Man for our salvation.
There are many other people who believe that God may be incarnate but they invent many other gods and see them in the whole world. They worship the forces of nature. These are different followers of the pagan cults, the ancient ones like Hindus and the new ones like various followers of the occult teachings, astrology and sorcery. They worship the spirits thinking that they serve the true gods. In fact, they worship the demons and do not know the Spirit of truth, the Holy Spirit. But we, Orthodox Christians, are blessed to know the Holy Spirit because by the Holy Spirit the world is alive and the Church of Christ exists.
That is why it is so important to know the true God, Father, Son and Holy Spirit because our salvation depends on that. Thus it is a great blessing and happiness to be an Orthodox Christian and to know the true God one in the Holy Trinity.

The choir piously performed the hymns of the feast during the preparation for Holy Communion.

Following the Liturgy dismissal the Rector and the altar server performed the rite of Glorification singing the troparion, kontakion and magnification of the feast before the festal icon in the middle of the church. Then the Rector preached a short sermon in English stressing the main thoughts of his Russian homily. He also congratulated our men on the occasion of the Father’s Day. A traditional Polychronion (“Mnogaia leta!”) was performed.

After the Liturgy the Rector served Pentecostal Vespers with kneeling prayers.

Following the services the Rector and parishioners continued their celebration of the feast at the trapeza table enjoying delicious food and a nice conversation. 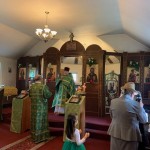 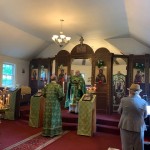 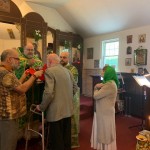 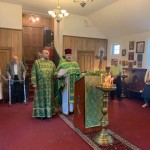 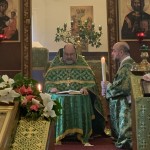 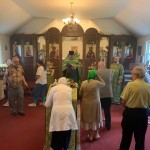