On Tuesday, July 28, on the day of commemoration of the Holy Equal of the Apostles Great Prince Vladimir, Rector of St. George Church, Archpriest Igor Tarasov attended celebration of the patronal feast at St. Vladimir Memorial Church in Jackson, NJ.

Coming early before the Liturgy, our Rector looked at the surrounding area of the Memorial Church. He visited the lower temple dedicated to St. Olga where the three prominent hierarchs of the ROCOR are buried, Metropolitan Laurus (Shkurla), Archbishop Vitaly (Maksimenko), and Archbishop Nikon (Rklitsky). Fr. Igor offered his prayers for the repose of those known archpastors of the Russian emigration and venerated the altar of the lower church. Later he joined the clergy in meeting the celebrating bishop in the main, upper temple of St. Vladimir.

The Divine Liturgy at that temple was headed by the First Hierarch of the Russian Orthodox Church Abroad, His Eminence, Metropolitan Hilarion. He was co-served by the two ROCOR hierarchs: Archbishop Gabriel of Montreal and Canada, and Bishop Nicholas of Manhattan. The bishops were joined by the clergy, including Archpriest Igor Tarasov.

The divine services were held in the presence of the wonderworking Kursk Root Icon of the Mother of God. Faithful came to pray at the church’s patronal feast from several other parishes. Virtually all those present received Holy Communion.

Upon completion of the Liturgy the clergy performed a short prayer service to St. Vladimir in the middle of the church. Then Metropolitan Hilarion congratulated all those present on the feast and addressed them with a sermon, in which he pointed out that we must always remember those who brought us the Holy Faith of Christ and, first among these, the Holy Equal of the Apostles Prince Vladimir. Before this St. Vladimir was a pagan who worshipped the forces of nature, being also a man of particular cruelty. But the Lord saw a great spiritual future in him, and enlightened him. Prince Vladimir found Christ the Savior, was born again in the spirit, and brought the true faith to his people. Thus Metropolitan Hilarion called on the faithful to thank God for giving us the Orthodox faith through His Saints, and to ask for the prayers of the Saints and our pious forebears. The Protodeacon intoned the Polychronion for the hierarchs, clergy, and all who prayed at the services.

Following the services the bishops, clergy and the faithful gathered for a festal luncheon in the Parish Hall. Fr. Igor had an opportunity to interact with Metropolitan Hilarion, Archbishop Gabriel and Bishop Nicholas and to present them with the copies of his book of talks on the Nicene Creed. 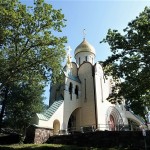 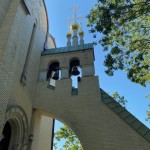 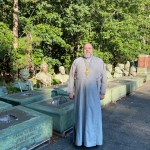 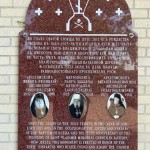 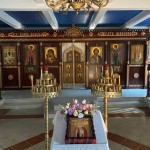 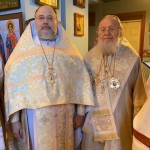 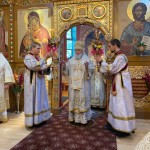 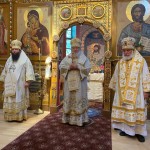 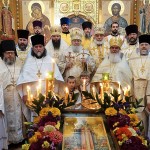