On August 2, on the 8th Sunday after Pentecost, as well as feast of the Holy Prophet Elias (Elijah), we had a beautiful celebration at St. George Church. Our Rector, Archpriest Igor Tarasov headed the service of Divine Liturgy. After the Scripture readings he preached the following homily in English:

“Dear brothers and sisters! Today’s Sunday Gospel tells us about a miraculous multiplication of the five loaves of bread our Lord Jesus Christ performed. He fed five thousand men with five loaves of bread and two fishes. In doing so, Christ showed that He is the Son of God. He repeated what God did to His chosen people when He fed them in the desert after their exodus from Egypt. In both instances God interfered with the powers of nature to help the people whom He loved. Such interference is called a miracle”.
“We are not very much accustomed to the miracles in our daily life. Many of us tend to think that miracles are almost impossible. Some of us consider them totally impossible. However, life in faith gives us numerous examples when something unusual and extraordinary happened. A person who deeply believes in God, would certainly admit that miracles do happen. Holy Scripture tells us about many instances when the God’s power and omnipotence, His love and compassion worked in a way that the usual order of things was overridden. Today’s Gospel is one of those instances. It is physically impossible to feed five thousand men and many more people with only five loaves of bread. But through the power of our Lord Jesus Christ it was accomplished. It was also impossible to feed the Israelites in the desert for 40 years, but God took care of them sending them food literally from heaven or giving them other chances to feed themselves. When God wishes the order of nature becomes overridden. He is the Creator of this world. He is the Lord of nature. Thus the nature may be altered only by Him”.
“Today we also observe the feast of the Holy Prophet Elias. This holy man lived long before Jesus Christ, was faithful to God and was blessed by special gifts. Miracles did happen in his life. Holy Apostle James wrote about him the following: “Elijah was a man with a nature like ours, and he prayed earnestly that it would not rain; and it did not rain on the land for three years and six months. And he prayed again, and the heaven gave rain, and the earth produced its fruit” (Jam. 5, 17-18). Holy Scripture of the Old Testament also tells us that Elijah was sent by God to a place called Zarepthah where a widow had to provide for him. Encountering that widow Elijah asked her to give him something to eat. But the widow complained that she has no food, but some flour in the bin and some oil in the jar. Elijah insisted on feeding him first and then he promised to the poor widow that “Thus says the Lord God of Israel: ‘The bin of flour shall not be used up, nor shall the jar of oil run dry, until the day the Lord sends rain on the earth.’”(1 Kings 17, 14) It happened exactly as Elijah predicted according to the will of God. They could eat from that little portion of flour and oil for a long time. Isn’t that similar to multiplying the five loaves of bread? God is infinite. When He wants, things He created and granted to us may also become infinite”.
“Even the end of the earthly life for Holy Elijah was miraculous. He did not die, but was taken to heaven by the chariot of fire, as the Scripture says. Thus the order of human nature sometimes becomes changed due to the will of God”.
“If the miracles happened many times in the life of the righteous people like Elijah, they may happen in our lives. Let us remember that God can do anything. If we have a true and firm faith, miracles will be worked in our lives. God will stretch His hand to us overcoming the obstacles of nature, our spiritual nourishment will never stop, His love shall not be used up, nor His grace will run dry, until the day the Lord comes again”.

The choir nicely performed Psalm 33 and a hymn to the Most Holy Theotokos during preparation for Holy Communion.

After the Liturgy dismissal the Rector and the altar servers performed the rite of glorification in the middle of the church singing the troparion, kontakion and magnification of St. Elias before his icon. Then Fr. Igor preached a brief sermon in Russian conveying the thoughts of his English homily. He also congratulated our new parishioner, Emilian Suric, on the occasion of his past name day handing to him the Theotokian prosphora and proclaiming a traditional Polychronion. 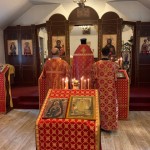 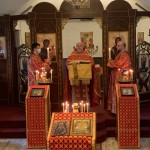 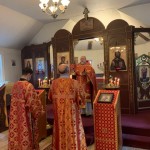 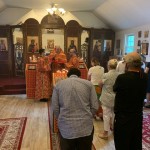