On October 11, on the 18th Sunday after Pentecost, Archpriest Igor Tarasov, Rector of St. George Church headed the Divine Liturgy at our Parish temple. He was co-served by Priest Nenad Flora.

After the reading from the Holy Gospel Fr. Igor preached the following homily in English:

“Dear Father, dear brothers and sisters in Christ! Today’s Gospel tells us how our Lord Jesus Christ called His first disciples, holy Apostles Peter, James and John. Another Gospel would tell us that there was also holy Apostle Andrew, the brother of Peter whom the Lord called among the first. There was a similar reading from the Gospel of Matthew on the 2nd Sunday after Pentecost. But today’s story is a little bit different. It shows us the great difference which lays between God and man”.
“Our Lord Jesus Christ is God although He appeared to the world as the Son of Man. As God He came to save the man. In today’s story He was preaching to the people from the boat belonging to Simon Peter. Then Jesus asked Peter to launch out into the deep and let down the nets for a catch. Holy Fathers say that this request meant a radical change in the life of St. Peter. But for Simon Peter of that time, time described in the Gospel of today, this seemed to be a strange and futile idea. As a fisherman he knew and was sure that there is no sense of doing so. And he expressed his thoughts to Jesus saying: “Master, we have toiled all night and caught nothing; nevertheless at Your word I will let down the net” (Lk. 5, 5). St. Peter had his human understanding of the situation. As a man he was right. But our Lord Jesus Christ had a different understanding. God had a different vision. And we know that the wonderful catch of a lot of fish which followed the attempt of Peter, proved Jesus to be right and Peter to be wrong. God may see things differently”.
“But as a man, St. Peter showed obedience to God. Honoring Jesus as his Master, he obeyed His request. Yes, he disagreed with Jesus, but he said: “Nevertheless at Your word” I’ll do it. And when he saw that Jesus is not just a Teacher or a Master, but someone higher than that, he called Him the Lord. Peter fell down at Jesus’ knees, saying: “Depart from me, for I am a sinful man, o Lord” (Lk. 5, 8). In this exclamation we see the fear of a man standing before God. Peter expresses human fear, incomprehension of God’s majesty and the sense of difference between man and God. He also acknowledges his own unworthiness and sinfulness”.
“Today’s Gospel teaches us to understand our own sinfulness and to exercise humility before God. But it also teaches us to see how different is our vision and understanding of things from the vision God has about them. It may happen in our own lives when we see something to be strange or impossible, but then, by the will of God, it becomes very possible. For instance, many people in Russia thought that after the decades of state atheism and persecution of the Church, religion will cease to exist. A priest some 40 years ago could have a temptation to think just as St. Peter thought in today’s Gospel. He would think that there is not many people to work with, not much a priest could do. But Jesus inspired His followers not to give up, but to “launch into the deep”. And in some time they saw that their preaching is not in vain, that their service is needed and that the churches are not empty. The state atheism was gone, ceased to exist, and the people in the new countries emerged after the fall of the Soviet Union could freely exercise their religious beliefs”.
“Today we commemorate Venerable Chariton the Confessor. He lived in the times of persecutions of the Church and he thought that he was going to be killed as a Martyr. He was imprisoned and tortured but his life was spared. This is why we call him the Confessor, not Martyr. Then the prosecutions ceased and holy Emperor Constantine made Christianity the state religion in the Roman Empire. St. Chariton lived a long life after that and he became a monk in the desert. He was one of the first monks in Christian Church. He founded several monasteries, composed the monastic rules and we believe that he composed the office of the monastic tonsure. So, St. Chariton believed that he was supposed to die for Christ but the Lord had a different vision. The Lord spared him and let him become a founder of monasticism. And this is another example of how our understanding may be different from God’s plan”.
“Therefore, dear Father, dear brothers and sisters, let us trust God and His perfect vision. Let us strive for spiritual growth despite our sense of uncertainty or lack of confidence. Let us listen to what our Lord Jesus Christ is telling us to do and let us obey Him acknowledging our imperfection before Him. But let us also remember His encouraging words pronounced to St. Peter: “Do not be afraid”. Let us not be afraid if we are doing something good with the divine grace of our Lord Jesus Christ, our only Source of help and miracles. He is the only one who may accomplish things that we may consider impossible. Through His divine power we may share in His accomplishments”.

After the dismissal of the Liturgy the Rector preached a short sermon in Russian conveying the ideas of his English homily. He also congratulated Maria Malyshev on the occasion of her name day, the memory of Venerable Mary the mother of Ven. Sergius of Radonezh. Fr. Igor proclaimed the traditional Polychronion (“Mnogaia leta!”) on her behalf and handed her the Theotokian prosphora. Then he also made some announcements.

Following the Liturgy the Rector performed Baptism of Phoebe Ching-Huei Li who desired to be received unto the bosom of the Holy Orthodox Church. After celebrating the Mysteries of Baptism and Chrismation, the new member of the community was churched and received Holy Communion. 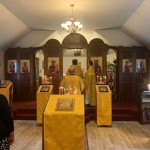 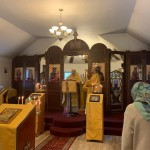 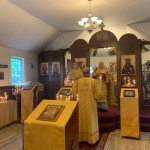 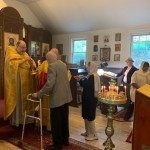 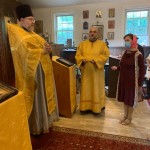 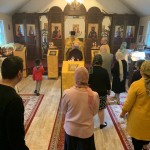 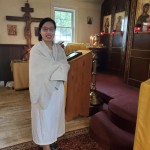 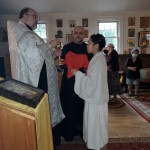 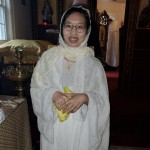 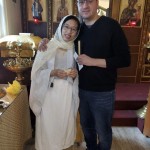