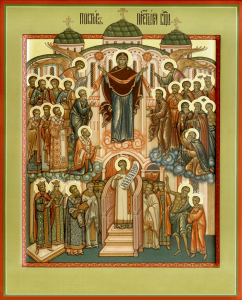 On October 18, on the 19th Sunday after Pentecost, our Parish also celebrated Protection of the Most Holy Mother of God. Rector of St. George Church, Archpriest Igor Tarasov served the Divine Liturgy. After the Scripture readings he preached the following homily:

“Dear brothers and sisters in Christ! Today’s first reading from the Gospel presents us a very difficult advice our Lord Jesus Christ gives. He says: “Love your enemies, do good, and lend, hoping for nothing in return” (Lk. 6, 35). It seems to us that it is something unnatural, not normal to love bad people, especially your enemies. These words may seem to be weird and even stupid. However, these are the words of the Lord, the words of Jesus. And if we recall the whole life of our Lord here on earth, we may realize that He acted that strange way. Jesus did not hide from His enemies, did not run away from the danger being apprehended and killed. When He was taken by His enemies He said nothing to avoid being crucified. And when He was tortured and crucified He prayed for His enemies and executioners: “Father, forgive them, for they do not know what they do” (Lk. 23, 34). Therefore, if we think that a commandment to love the enemies is a strange and unnatural, let us remember that Jesus Christ gave us an example of that”.
“Another thing that we should keep in mind is that our enemies are also human beings. And every human being can make mistakes. We make them also, and we may also cause trouble to the other people. But God loves all of us. Today we heard the words that God is “kind to the unthankful and evil” (Lk. 6, 35). Sometimes we wonder why God allows bad things to happen and let bad people to live, sometimes live long lives and even prosper. It is because God is kind. We are all His children, good and bad. “And He makes His sun rise on the evil and on the good, and sends rain on the just and on the unjust” (Mt. 6, 45). We also commit sins, and when we do so, we are not quite good. No, we are evil. But God forgives us when we repent. Being the children of God, we should love each other. God does it to us. He awaits our conversion and repentance if we do something wrong. If we do not repent at all, then God will judge us at the end of times. But not now”.
“Thinking of the enemies, we may recall our today’s celebrated feast of the Protection of the Most Holy Mother of God. We commemorate our Lady’s miraculous appearance in the church in Constantinople and saving of the imperial city from the attack of the invaders happened in the 8th century. The two holy men, Andrew and Epiphanius saw the Holy Mother of God appearing in the temple and covering the city with Her veil. After that the city was spared and the enemies retreated. This was a remarkable example of the special intercession of the Blessed Virgin for the Christian people. It was also a manifestation of the power of prayer and faith of the pious people. At that time all the inhabitants of Constantinople were fervently praying and asking God and the Holy Virgin to save them and their city”.
“It is interesting that the enemies who besieged the imperial city of Constantinople were our ancestors, Eastern Slavs. Back then they were pagans and did not know Christian faith. But later they embraced Christianity and became also protected by the precious veil of the Blessed Mother. She showed Her love and intercession for our people many times. Therefore it is also remarkable that the Russian Church, as well as all Slavic Churches, preserved celebration of today’s feast, while the Greeks did not, although the event we celebrate happened with them. Our faithful love the Blessed Mother and like to honor Her on many occasions”.
“Therefore, dear brothers and sisters, let us not judge our enemies at this point but let us wait for the Last Judgment of the Lord. Let us not forget that some enemies may later become our friends. It happens in the course of history that some nation is fighting another nation but later they make peace and become friendly. It also happens between the communities. Nowadays even among Orthodox Christians we see some differences and even rivalry. The Patriarchate of Constantinople is now competes with the Russian Church but as we notice, some Greeks attend Russian churches because they prefer traditional piety. Some Orthodox are more liberal and loose, some are more strict and conservative – like the Russian Church. But there are Greeks who attend our churches. And as I heard the Russian monastery on Long Island received a generous donation from the Greek people to build a new temple. Thus it becomes relative who are now rivals or allies, enemies or friends”.
“Dear brothers and sisters! Let us ask God to give us a soft heart to love our enemies in order to be similar to our Lord Jesus Christ who loved His enemies and prayed for them. Let us fervently pray to the Most Holy Mother of God, our Intercessor and Protectress in all troubles and needs, so She may help us and cover us with Her holy veil protecting against all evils”.

The choir beautifully performed the hymns in honor of the Theotokos during preparation for Holy Communion.

Following the Liturgy dismissal the Rector performed the rite of glorification in front of the festal icon singing the troparion, kontakion and magnification of the feast. He also made an announcement regarding the future renovations in the sanctuary and called the faithful to be generous in their donations for the temple’s beautification.