On January 7 the Russian Orthodox Church observes feast of the Nativity of our Lord Jesus Christ, also known as Christmas. Our St. George Church had a nice celebration of that holy day. Our parishioners as well as some visitors came to the temple to participate in the services, however due to the pandemic we did not have so many people attending.

On January 6, on Christmas Eve, our Rector, Archpriest Igor Tarasov served the All-Night Vigil. That service consists of the Great Compline, Matins and the First Hour. On Christmas day, January 7, our Rector served the Divine Liturgy. Since Our Sacristan and altar server, Andrew Malyshev, was sick and could not come for the services, Emilian Suric was blessed by the Rector to substitute and to serve in the altar.

Following the Gospel lesson the Rector proclaimed the Christmas Sermon of Venerable Isaac the Syrian.

After the Liturgy dismissal the Rector and the altar server performed the rite of glorification singing the troparion, kontakion and magnification of the Nativity before the festal icon in the middle of the church. Then the Rector greeted the faithful on the occasion of the great holy day of the birth of the Son of God. He preached a sermon in Russian pointing out that we usually look for some comfort in this life. There is no other true comfort than our Lord and God. The recent tumultuous times showed that everything in this world is uncertain, thus the people were looking for some consolation and moral support. However, they are mistaken if they wish to find those in other things than God. Recalling the Nativity of Christ we may also think that the event of the Birth of the Savior was far from being certain and comfortable. Jesus was born in a cave, not in a royal palace, not even in his home. Not so many people knew and cared about His Birth. Right after that His life was threatened. But this was the coming of the Lord into this world and it made a huge difference in our lives because this was the coming of the Savior. God entered into our life; God in Whom only we have comfort. We, as His children, have to fulfill His will and serve Him. The wise men, the shepherds, St. Joseph and Mary – all served Him in their own way. On the other hand, king Herod was troubled by His Birth fearing that this small Child could deprive him of his kingdom. Herod who was a ruler over a small piece of land, over a quarter of the Holy Land, trembled because he was afraid to lose his little domain. Thus Herod became an enemy of Christ. Even Augustus, the Roman emperor, served the Lord’s Providence by ordering a census. Because of that order St. Joseph and Mary had to travel to Bethlehem where Jesus had to be born. That place of birth was important to fulfill the prophecies. Thus even not knowing about Christ, Ceasar Augustus served Him while a small ruler Herod opposed Him. The Rector concluded his sermon by saying that seeing different reactions from the people, we should put our trust in God and serve Him in our own way.

After the Rector’s sermon the parish Warden, Olga Roussanow had a speech in which she congratulated Archpriest Igor Tarasov on the occasion of his 31st Anniversary of priestly ordination. Traditional Polychronion (“Mnogaia leta!”) to Fr. Igor was proclaimed.

Our celebration continued at the trapeza table where a tasty luncheon was prepared by our parishioners. Everybody enjoyed delicious meals and a nice company. 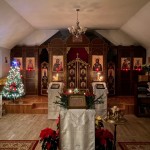 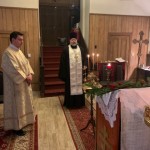 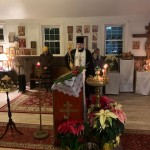 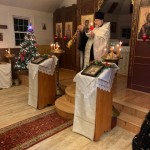 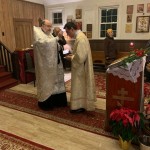 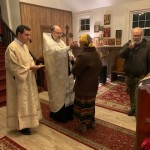 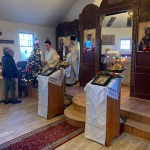 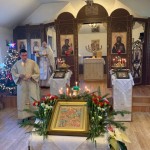 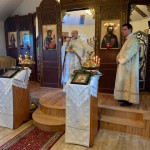 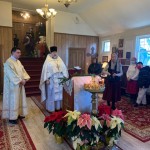 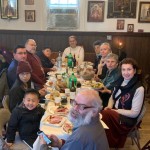 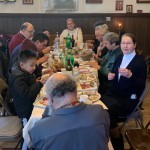