On January 3, on the Sunday before the Nativity, our community had a nice celebration at St. George Church.  Since it was already a time of the Prefeast of the Nativity, the temple was adorned for the anticipated holy day. Our parish Rector, Archpriest Igor Tarasov served the Divine Liturgy. After the readings from the Sacred Scripture he preached the following homily:

“Dear brothers and sisters in Christ! Today’s Sunday before the Nativity in some way duplicates the previous Sunday, dedicated to the Holy Forefathers. The Holy Fathers whom we honor today are the blood relatives of our Lord Jesus Christ. But we sing again the troparia and kontakia of the Ancestors and commemorate the Old Testament Saints. Today’s Epistle lesson enumerates many heroes of the Old Testament telling us that all their achievements were due to their faith. Thus faith becomes a very important theme of today’s celebration of the anticipation of the Birth of Christ”.
“If we reflect upon the last passages of today’s Gospel reading, we may notice that faith was very crucial for St. Joseph when he had his doubts about the Virgin Mary being pregnant. The Gospel of Matthew tells us that Joseph and Mary were betrothed, but before they came together, Mary was found with the child of the Holy Spirit. We may easily imagine what kind of thoughts crossed the mind of Joseph. The words from the Akathistos of the Annunciation calls his feelings “the inner storm of doubtful thoughts”.  He was thinking that Mary deceived him although She was raised in the Temple of Jerusalem. But the angel of the Lord appeared to Joseph in a dream and revealed that Mary conceived from the Holy Spirit, and that Her Son will be called Jesus, which means the Savior. Thus Joseph was instructed that Mary is a holy Virgin and She will bear the Son of God. Although the way of revealing this to Joseph was very adequate for the divine Revelation (it was told him in a dream), he needed a strong faith to believe in that. We learn from the Gospel that St. Joseph not only believed in the Most Holy Virgin Mary and Her mission, he also acted in accordance with that belief serving and protecting the Most Holy Mother of God and the Child Jesus. This was the same kind of belief the Old Testament patriarchs, prophets and other heroes of faith had”.
”Same faith has to be imitated by the generations of the New Testament followers of Christ. The Birth of Christ teaches us to believe in things which are very hard to accept using only our human mind. It tells us that our Lord was born from the Mother without human father. It tells us that He was the Son of God, conceived by the Holy Spirit. It tells us that His Mother was a Virgin. She was a Virgin before His Birth, She was a Virgin during His Birth, and She remained a Virgin after His Birth. Virginal conception and permanent virginity of Mary are the truths of Christian faith. Our mind has difficulties with comprehending that. But we always have difficulties with comprehending God. His being and nature are ineffable. Same with the events of the Nativity”.
“For the Son of God to become man He had to unite Himself bodily with our nature, to be born from a human mother. But that could not be any woman. Divine Providence elected a representative of the Jewish nation, an heir of David, an immaculate Virgin. She became a living Tabernacle in which the very God had His place. Therefore, that person could not be a common woman living according to the corrupted human nature. She had to be without sin, an immaculate ever-Virgin. Thus, the virginity of the Most Holy Mother of God can be explained, but it is still a truth which is difficult to understand. We need faith, a strong faith”.
“Therefore, dear brothers and sisters, let us cherish our faith and act upon it to make things impossible possible, to accept the miracle of the Birth of Christ and to be saved by Him”.

The choir prayerfully performed the singing of the Psalm 33 during preparation for Holy Communion.

After the dismissal of the Liturgy the Rector expressed his gratitude to the parishioners who prepared the temple for Christmas holy days, including the Malyshev family who provided the new artificial Christmas tree, as well as Olga Vnukova and Olga Roussanow who cleaned the items in the temple and decorated the interior. Fr. Igor also greeted everybody on the civil New Year and stressed the importance of keeping the true faith and the right Christian values when we begin the new period of time in our lives and spiritually expect the Birth of the Lord. 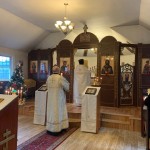 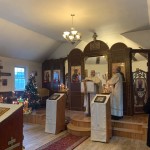 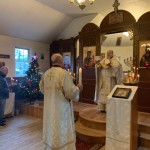