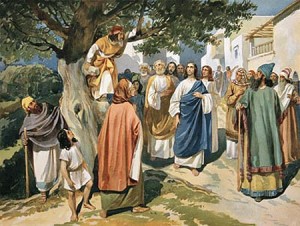 At that time Jesus entered and passed through Jericho. Now behold, there was a man named Zacchaeus who was a chief tax collector, and he was rich. And he sought to see who Jesus was, but could not because of the crowd, for he was of short stature. So he ran ahead and climbed up into a sycamore tree to see Him, for He was going to pass that way. And when Jesus came to the place, He looked up and saw him, and said to him, “Zacchaeus, make haste and come down, for today I must stay at your house.” So he made haste and came down, and received Him joyfully. But when they saw it, they all complained, saying, “He has gone to be a guest with a man who is a sinner.” Then Zacchaeus stood and said to the Lord, “Look, Lord, I give half of my goods to the poor; and if I have taken anything from anyone by false accusation, I restore fourfold.” And Jesus said to him, “Today salvation has come to this house, because he also is a son of Abraham; for the Son of Man has come to seek and to save that which was lost.”

Dear brothers and sisters in Christ! Today’s Sunday is the first of the five Sundays preparing us for Lent. And today’s lesson from the Gospel of St. Luke is about Zacchaeus the publican. Why this reading is selected for today? Because it is about conversion, about how a soul can change. Change of the soul is the purpose of the Christian life. So, we may observe how the soul of the publican named Zacchaeus changed because of the encounter with our Lord Jesus Christ.
Zacchaeus was a publican, a tax collector. It means that he was a very sinful and evil man. Publicans were known to be corrupt, crooks and evildoers. And Zacchaeus was a chief tax collector, thus he was the worst of the lot. Interestingly, that the name “Zacchaeus” means “the just one” or “the fair one” in Aramaic, the language spoken by the people in the Middle East at the time of Jesus. So, he did not live up to his name. And yet when our Lord Jesus Christ passed through the city of Jericho, Zacchaeus changed.
First of all, he probably decided to seek the Lord. All his actions demonstrated that wish. Then he started looking for Jesus who passed by. Zacchaeus climbed the tree to see Jesus. The trees are mentioned several times in the history of salvation. Adam and Eve were expelled from paradise because of the tree. Now their heir, a sinful man Zacchaeus uses a tree to acquire salvation. This was a sycamore, a fig tree. The fig leaves were used by Adam and Eve to cover their bodies after they sinned and became aware of their nakedness. Now another sinner being aware of his transgressions uses a fig tree to receive back the grace of the Creator. The Gospel tells us that he climbed it up because of his short stature. There is no doubt that it’s true. But any sin makes us smaller in the spiritual sense, so it is hard for us to see God. But Zacchaeus made an effort to see the Lord. Many people never make any effort to get closer to God. If it is easy for them to receive the grace, they get it. But if it becomes harder and requires an effort on our part, we do not bother to act. Zacchaeus acted and was successful. Jesus noticed him and spoke to him.
When Jesus expressed His willingness to visit the house of Zacchaeus, the latter made haste, came down the tree, and received the Lord joyfully. This is the sign that a sinful man rejoices becoming closer to the Lord, having Him under his roof. Conversion means being open to God to come and dwell within us, to work by His grace in us.
Further, Zacchaeus makes a statement saying: “Look, Lord, I give half of my goods to the poor, and if I have taken anything from anyone by false accusation, I restore fourfold.” (Lk. 19, 8). Now this is a real conversion. Zacchaeus not just declares that he becomes a changed man, he promises to give away a half of his wealth. He also wishes to restore justice by compensating the people he defrauded. And not just by giving back what he acquired by false accusations, but by returning fourfold! It was really a great conversion and true change that occurred in that man whose name was Zacchaeus, “the just one”. Now he began to live up to his name.
Observing the actions of Zacchaeus we should notice that he decided to change, struggled to do so, accepted God’s grace and made a proper resolution to convert truly. These are the four steps of conversion everybody should take if we truly wish to become changed or better. We must decide to convert, then struggle, make an effort to do it. Then we have to accept joyfully the Lord’s help, His divine grace. And, finally, we have to make a resolution to restore justice and to live up to our name, to our spiritual purpose. Our name, the name of a man, a human being, is great and our purpose is to be saved.