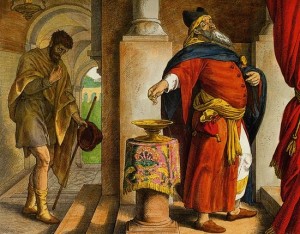 The Lord said this parable: Two men went up to the temple to pray, one a Pharisee and the other a publican. The Pharisee stood and prayed thus with himself, ‘God, I thank You that I am not like other men – extortioners, unjust, adulterers, or even as this tax collector. I fast twice a week; I give tithes of all that I possess.’ And the publican, standing afar off, would not so much as raise his eyes to heaven, but beat his breast, saying, ‘God, be merciful to me a sinner!’ I tell you, this man went down to his house justified rather than the other; for everyone who exalts himself will be humbled, and he who humbles himself will be exalted.

Dear brothers and sisters in Christ! Today’s Sunday is supposed to prepare us for the blessed and saving time of Lent. We heard the parable of the Publican and Pharisee, about the two men who came to the Temple to pray. All about them was different. Their social status and their moral reputation were different. Their prayers were different also. And the outcome of their prayers was totally different. One of them went down to his house justified, yet another did not. We would think using our human logic that God blessed the one who was considered morally upstanding. And not justified would be the one who is despised as a public sinner. But our Lord Jesus Christ reverses the expected conclusion. God’s reasoning is different from the man’s logic. In the eyes of God the publican is justified because of his humility. The Pharisee is condemned because of his pride.
If we try to evaluate those two men, let us listen to their prayers. The Pharisee states with satisfaction that he is not like other men – extortioners, unjust, adulterers. He is not lying. He behaves better than those bad people. He further states that he fasts twice a week. Very well, we are supposed to do the same, but who knows whether we actually fast on Wednesdays and Fridays. The Pharisee also tells that he gives tithes of all he possesses. This is much more than most of us do. No parishioner of this church gives tithes meaning 10 percent to his parish. It is a very painful subject. The Scripture tells us to give those 10 percent of your income for the Temple but virtually no one does it. If faithful gave at least 5 percent, our churches could do much better financially but even that does not happen often. Therefore, we must say that the Pharisee appears to be a much better person that most of us are.
As to the Publican, he appears to be worse than most of us. As we mentioned last Sunday, the publicans, or tax collectors were public sinners, crooks, extortioners, corrupted criminals, cheaters of the people and collaborators with the Romans. They committed many crimes and offended many people. Most of us are not so evil. Yet that kind of man, a despised evildoer, went down to his house justified.
Despite that the Pharisee was a public just man and the tax collector was a public sinner, God judged them in the opposite way. The reason of such an outcome is the attitude those two men had. The Pharisee was proud. He prayed, but his prayer was so preoccupied with his own goodness that he forgot about God. He actually talked to himself, not to God, in his prayer. He praised himself. And he judged others, particularly the publican. All that attitude of self-righteousness, self-exaltation and judging the others condemned him. The publican’s attitude was the opposite. He is aware of his indignity. His posture, his words of prayer express deep humility and contrition. God loves this kind of attitude. He does because it is the most fair and honest understanding of our human nature, our abilities and our position. Our nature is imperfect and corrupt. Our abilities are limited, and we are often inclined to sin. Our position is much lower than God’s position. Therefore, we need not to be proud and self-exalting. We need to be honest with ourselves and acknowledge our weakness, imperfection and evil propensities, as well as our evil deeds committed in the past. Then we will be exalted by God. The publican did and became justified. God opposes the proud, but exalts the humble.
Therefore, dear brothers and sisters, let us avoid pride and self-exaltation of the Pharisee and let us imitate humility of the Publican, so we will be blessed and justified in the fairest eyes of God.