On March 7, on the Meatfare Sunday, our parish family gathered for a beautiful celebration at St. George Church. Our Rector, Archpriest Igor Tarasov served the Divine Liturgy. After the Gospel lesson he preached the following homily:

“Dear brothers and sisters in Christ! Today’s Sunday is dedicated to the commemoration of the Last Judgment. This event is going to occur in the future of the world, at the end of it. Usually we commemorate something which already took place. But today we ought to reflect upon something which is going to happen some day. Our Lord Jesus Christ Himself told us that at the end of this world He will come again to judge the living and the dead. In today’s Gospel lesson we heard the words of the Lord describing how that final and dreadful judgment is going to happen”.
“First of all, we have to notice that the Last Judgment will be for everyone. The Gospel says that “all the nations will be gathered before Him” (Mt. 24, 32). It should be understood that not only nations, but all the people personally will be summoned to that judgment. No one will escape this adjudication. Therefore, we should not believe some false teachings attempting to say that some people will not appear at the Last Judgment. Everybody will be there”.
“Further, we should consider that all human kind will be divided in the two large groups. One group will be blessed and invited to the Kingdom of God prepared for them from the foundation of the world. Another group will be cursed and condemned to the everlasting punishment. Therefore, the eternal life which will start after that is going to be completely different for those two parts of the human race. The one part is going to enjoy the blessedness of heaven and paradise, yet the other will be tormented in hell”.
“Because the Last Judgment will be for each one of us and because it will end by either total blessing or total condemnation, it was called the “dreadful” judgment. And the Church wishes to remind us about that inevitable event, so we may prepare for it during the course of our earthly lives. But in today’s Gospel our Lord Jesus Christ desired not just to declare that the judgment will take place. He also told us in advance what kind of evidence will be considered there. After listening to the Gospel we realize that the main criteria according to which we are going to be saved or condemned will be whether we practiced the works of love and mercy towards the others. Our Lord lists those main works: feeding of the hungry, giving a drink to the thirsty, taking in the stranger, clothing the naked, visiting the sick or a prisoner. He also says that doing those things to one of the least of these His brethren equals doing these things to Him. By these words our Lord teaches us to love our neighbor and to consider such love equal to our love of God, to our faith. And it is not accidental that the Lord is not talking about faith or prayer or other spiritual works to be considered at the Last Judgment. First of all, He requires our love and compassion towards “one of the least of these His brethren””.
“Whom should we consider those “least of His brethren”? We should see them in everybody who is in need. Again, the Lord gives us a list. These are the hungry, the thirsty, the strangers, the naked, the sick or the imprisoned, all the people in need, in trouble, in pain. Generally speaking, this is the whole human race, all our fellow men and women. The final sentence at the Last Judgment and our eternal destiny will depend on whether we fulfilled the works of love to these least brethren. Therefore, let us not delude ourselves thinking that when we fail to do something good, it was not done against God Himself. Let us stop thinking that when we refuse to love, to help or to be nice to someone, we just fail to please a man, not God. The Son of God became Man in order to care for everyone, so He wishes us to imitate Him in such a lovely care”.
“There is an ancient story of some king who dressed as a poor and simple person and used to walk on the streets of his capital city. That king was observing how his subjects live, what they do and what they say. He also looked at how they behaved, how they treated each other. So, the people did not recognize their king because he was disguised as a plan person, a poor man. And some of them treated him badly, but some were nice to him. In the same way our Lord Jesus Christ is our King in disguise. He is in a symbolic, spiritual sense because He says that if we do something good or bad to our brethren, we do it to Him. Thus when we see someone in need, let us remember the story of the king in disguise”.
“Dear brothers and sisters! Let us, therefore, prepare for the Last Judgment of the Lord by fulfilling the works of love, doing them for our neighbors and thus doing them for the Lord. Let us earn for ourselves a place at the right side of the Son of Man who will judge us on the last day. Let us work now to become worthy of the eternal Kingdom prepared for us at the foundation of the world”.

Since there were no services for the departed performed on Meatfare Memorial Saturday, the Rector added the Litany for the deceased to the Liturgy with commemoration of those who had fallen asleep.

The choir prayerfully performed penitential hymns from the Lenten Triodion during preparation for Holy Communion.

Following the dismissal of the Liturgy the Rector preached a brief sermon in Russian concerning the commemoration of the departed and made some announcements.

After the liturgical service the Annual Parish Meeting was held. 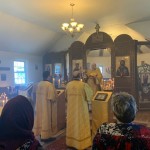 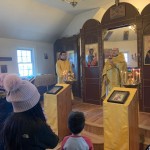 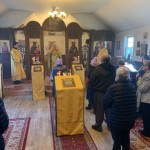 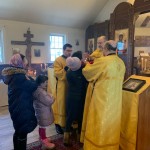 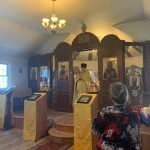 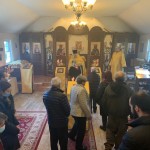