On May 16, on the Sunday of the Holy Myrrh-bearing Women, we had a beautiful service at St. George Church. Our Rector, Archpriest Igor Tarasov celebrated the Divine Liturgy. After the reading from the Holy Gospel he preached the following homily:

“Christ is risen! Dear brothers and sisters in Christ! On this Third Sunday of Pascha we honor the female disciples of Christ, the holy Myrrh-bearing Women. Therefore, today’s feast should be considered the “Orthodox women’s day”. Thus our conversation today will be about women”.
“It is common today among the enemies of faith to criticize Christianity and the Church for degrading women. But let us examine the Scripture and the history of salvation and we will see that women in Christianity are really honored and respected very much. From the very beginning of the preaching of our Lord Jesus Christ, many women listened to His holy appeal to repentance, love and forgiveness. The teaching and words of Christ found a warm response in the women’s hearts. The Gospel tells us about women following Jesus, serving Him and the Apostles, about women seeking His help, about women repenting for their sins”.
“It should be noticed that we find no woman among the enemies of Christ. The people who hated Jesus, who condemned Him, those who plated the crown of thorns, those who crucified Him – they all were men. But, on the other hand, even the wife of Pilate raised her voice to defend Jesus. When our Lord was dying on the cross, no Apostles (except St. John the Theologian) were near Him. They all scattered and hid themselves. However, the women disciples remained faithful to Him along with His Most Holy Mother. In contrast to the scared and scattered Apostles, the Myrrh-bearing Women came to the Lord’s tomb to anoint His body with the spices. They courageously sought to fulfill the burial custom, but they also expressed the great love and devotion for Jesus, the qualities typical to the true heart of a woman. And we read in today’s Gospel that the Myrrh-bearing Women were rewarded by the honor of being the first witnesses to the Resurrection of Christ. The tradition holds that the risen Lord first appeared to His Most Holy Mother, while the Scripture says that the first appearance was to the Myrrh-bearing Women. In both instances the honor of seeing the risen Christ was given to the women”.
“The history of Christianity, beginning from the time of the New Testament and continuing in the history of every Christian country gives us a lot of examples of the holy women, women who endured the martyrdom for their heavenly Bridegroom – Jesus Christ; women who renounced the world and saved their souls in the desert; women who preached the Christian faith to the whole nations. These are those whom we remember by name. But there were a multitude of those unknown who kept their faith, raised their children in the spirit of piety and purity, taught them to pray and to worship God. Although they did not build the hand-made temples, they did create the domestic churches in their families and lit the light of faith in the souls of their children”.
“Love and care are those main feelings that God instilled in every woman’s heart. God called the woman to fulfill a task no man can fulfill – to be a mother. She is called to give life And a Christian woman and mother is also called to create spiritual life. The way a priest serves in the altar, a Christian mother should act in the soul of a child. She creates life, thus by her loving and devout heart she is called to elevate such life of her child to the holiness. Therefore, let us see how the Orthodox Christianity honors women. Let us honor today the holy Myrrh-bearing Women, as well as all holy Christian women, all Christian mothers and pray the Lord that He may bless them with the grace to be loving, caring, faithful and courageous in their life of faith, in their endeavors of motherhood and in their striving for salvation”.

Following the dismissal of the Liturgy the Rector congratulated our ladies on the occasion of this Sunday which is the Orthodox Women’s day. Traditional Polychronion (“Mnogaia leta!”) was proclaimed. Then Fr. Igor also greeted Tamara Gusnezow on the occasion of her past name day, proclaiming a Polychronion on her behalf and handing her the Theotokian prosphora.

After the Liturgy the Rector performed a memorial Litia commemorating a year of falling asleep of Claudia Popescu. 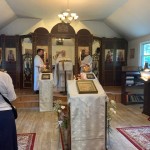 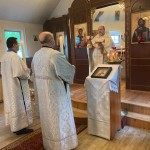 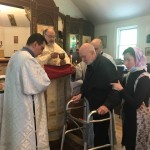 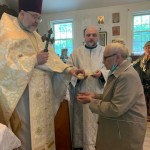 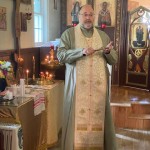