On May 23, on the Sunday of the Paralytic, Rector of St. George Church, Archpriest Igor Tarasov celebrated the Divine Liturgy in our parish temple. After the Gospel lesson he preached the following homily:

“Dear brothers and sisters in Christ! Christ is risen!”
“The Fourth Sunday of Pascha is devoted to the miracle of healing the paralytic. Today’s Gospel story tells us how it happened and gives us many details. It happened in Jerusalem, near the Sheep Gate. There was a double-basin pool believed to have the healing powers. It had been discovered by the archeologists about 100 yards north of the temple area. The water for this high-ground pool came from underground springs, and it was used to wash down the sacrificial lambs before they were slain. This is why it was near the Sheep Gate, the gate through which the lambs were carried to the temple. This became the place of the miraculous healing of the paralyzed man who had been sick for 38 years”.
“Pascha is the time of miracles, a time of healings. Our Lord rose from the dead in order to make us risen from spiritual death and infirmity. This is why this event which happened long before the holy Passions and Resurrection of Christ, is commemorated now when we continue our paschal celebration. In the setting of today’s story we may also recognize the image of the holy Baptism. The Church keeps reminding us of the Baptism during the Easter season. On Pascha we sung the baptismal hymn instead of “Holy God…”, on Bright Monday we read the Gospel on the baptism of St. John. Today we hear about a pool having the healing water, so everyone who enters the pool first after the stirring of water, becomes cured. It reminds us of the bath of the holy Baptism”.
“Holy Fathers recognized an image of Baptism in this story long ago. They stressed that before the actual coming of our Lord and Savior Jesus Christ the pool at the Sheep Gates was only a prefiguration, a primary image of the holy Baptism. After Jesus came, the human race was given a fulfillment of that image, a true purification, a true healing, a spiritual rebirth in the Lord”.
“Bethesda was a place of miracles. They used to happen there. But when our Lord came, He Himself appeared to the world as a Person of miracles, the real Source of them and a perfect Worker of the miracles. At the Sheep Gate pool only one person could be healed at one time. Whoever could step in the water first after the stirring would be made well. Now, in Jesus and in His Baptism, the grace of God is working for everyone and at any time. We further notice that the miracles of healing at that pool happened due to the action of an angel. An angel went down at a certain time into the pool and stirred the water, so it became healing. Now, in Christ there is no angelic mediation. Our Lord Himself comes down to the pool of our Baptism to give the birth of the new person in Him. Finally, the water of Bethesda used to grant only physical and temporal well-being. It cured the body. The grace of the risen Lord grants spiritual and eternal well-being which begins with Baptism”.
“In addition, we may recall that the paralytic could not step into the pool without any help from others. Because of his condition he was not able to move and to get to the pool. He told the Lord, “I have no man to put me into the pool when the water is stirred up; but while I am coming, another steps down before me” (Jn. 5, 7). The whole human race suffered in a similar way. It was spiritually paralyzed by the fall, and no one could help. No man could save humanity. Only God Himself could do it. And He did it by becoming Man. The paralytic had no man to put him into the pool, but God and Man, Jesus Christ did heal him without even putting into the pool. Therefore, we should appreciate the gift of divine grace given to us through our Lord Jesus Christ”.
“Today we also celebrate feast of the Holy Apostle Simon the Zealot. He was one of the 12 Apostles, and he is famous for believing in Christ after the first miracle Jesus had performed. It happened in Cana of Galilee where Jesus and His Blessed Mother were invited to a wedding. At that wedding our Lord turned water into wine. The tradition says that the groom at that wedding was Holy Apostle Simon. This is why he is also known as Simon the Canaanite. Seeing that miracle he changed his life, followed Christ and left even his newly-wedded wife. For his zeal in faith he was called the Zealot, so we may say that for sure, he was not spiritually paralyzed but very much alive. But his spiritual ability and his zeal were not just his own achievements but they were due to God’s help. First it was due to the first miracle of Christ in Cana; then it was due to God’s grace which led this Holy Apostle throughout his life in Christ”.
“Therefore, dear brothers and sisters, let us continue to rejoice in the Resurrection of the Lord with an understanding that we are reborn, washed up and granted an eternal life in the holy Baptism that makes us similar to the image of the Lord who died and was risen from the dead”.

The choir prayerfully performed the Exapostilarion and the Aposticha of Pascha during the time of preparation for Holy Communion.

After the dismissal of the Liturgy Fr. Igor congratulated our new parishioner Nicholas on his past name day celebrated on May 22. The Rector proclaimed traditional Polychronion on his behalf and handed him the Theotokian prosphora.

Following the Liturgy the Rector performed a memorial Litia requested by the Malyshev family. 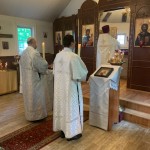 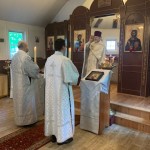 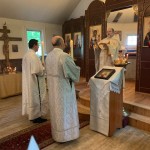 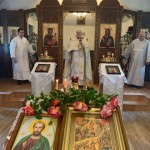 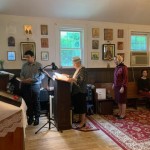 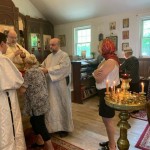 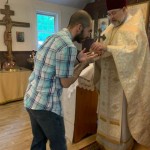 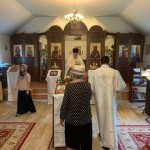